Is Lying About Gun Rights a Prerequisite for Attorney General?

“[GOA has tied Lynch] to justices Elena Kagan and Sonia Sotomayor, as well as to [Eric] Holder, each of whom the Gun Owners of America calls ‘a committed anti-gun radical.’” — National Law Journal, January 26, 2015

The Obama administration, which has perfected the art of lying to the American people, has found a chief law-enforcement officer who will fit right in:  Attorney General Nominee Loretta Lynch.

For those who believe lying (“If you like your plan, you can keep your plan.”) is justified to accomplish “noble” anti-gun policy goals, Lynch appears to be the perfect choice.

But for those who think the Attorney General should tell the truth (for a change), well, not so much. 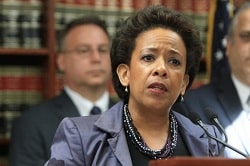 Lynch stood before the Senate Judiciary Committee to answer questions last week, and the nation saw a lot of dissembling on her part.

Let’s start with Operation Choke Point, the Justice Department program intended to destroy the firearms industry by cutting off credit and credit card processing to gun manufacturers and dealers.

On January 7, Senator David Vitter outlined his concerns about Choke Point in a meeting with Lynch in his office.  Lynch promised to look into it.

Two weeks prior to her testimony, Vitter asked for a written response to his concerns about Choke Point.

Yet, when asked by Senator Mike Lee about Choke Point, under oath, during her hearing before the Senate Judiciary Committee, Lynch said this:  “I’m generally familiar with the name Operation Choke Point…  My general understanding of it is that it looks to target financial institutions that are involved in perpetrating frauds upon consumers…”

But she had heard those concerns.  She had been asked about them in writing.  And she obviously was feigning ignorance to conceal the fact that her administration of the Justice Department would be “more of the same.”  In other words, she didn’t speak the truth.

Now, if she were a dunce, it would have been one thing.  But Lynch exhibited encyclopedic knowledge of section numbers and legislative language when needed to administer “put-downs” to Republicans who dared question the legality of Obama’s executive actions.

And yet, when it came to controversies like Choke Point, she repeatedly took the Sergeant Schultz defense:  “I know noooo-thing.”

Lynch claimed to have read the opinion of the Office of Legal Counsel (OLC) and found it “reasonable.”  Pressed over and over again, Lynch refused to give an independent assessment of the Office’s opinion.

Yet, when asked about waterboarding — also the subject of an OLC opinion — it took her a nano-second to state her opinion:  It was torture and the Bush administration officials who sanctioned it, criminals.

Now, the point is not whether waterboarding was good or bad, legal or illegal.  The point is that Lynch was dissembling about her ability to express her independent judgment about the Justice Department’s legal opinions.  And she was doing it in a way designed to deliberately mislead the Judiciary Committee.  Why?  Because telling them the truth about her intention to continue Eric Holder’s illegal policies would have caused problems for her confirmation.

Make no mistake about it:  It’s not a question of Eric Holder’s conduct.

It’s a question of whether Loretta Lynch intends to continue the same policies.

We’ve seen this course of conduct before.  It starts with an Obama nominee who, like Lynch, obviously comes from the far, far Left, but who has a minimal paper trail.  (Lynch’s chief patron was New York anti-gun zealot Charles Schumer.)

Like Lynch, Sonia Sotomayor had schmoozed the Judiciary Committee, claiming under oath that she was open-minded about the Second Amendment.  But as soon as she was confirmed, she made it clear, in an opinion that did not require her views on the issue, that she believed the Heller case should be reconsidered. Obviously, Sotomayor had never been open-minded about the Second Amendment; she had, instead, lied under oath.

And so it was with the deceptive testimony of Eric Holder and Elena Kagan.

There’s an old saying:  “Fool me once, shame on you.  Fool me twice, shame on me.”  But what do you say about someone who allows themselves to be fooled a fourth time?

ACTION: Sadly, the writing is on the wall, and Loretta Lynch will probably be confirmed as Attorney General.  But it’s important, nevertheless, for Americans to urge Senators to oppose the Lynch nomination.  So click here to send a message to your two Senators.