What if a man ascended to the presidency who was so ruthless in his desire to transform the United States to his bidding that the restraints of the Constitution became irrelevant to him?

What if his sycophantic Attorney General excused his law-breaking, while his regulators sought to destroy his political opposition?

What if his vicar in the Senate obliterated the Senate rules in order to pack the courts with toadies and go-fers who existed to do the President’s bidding?

We have rarely witnessed such horrible scenarios in our country’s 239-year history — and the resultant crisis threatens to tear our country apart. 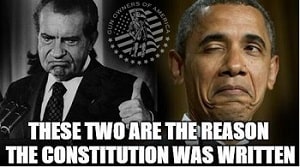 If tax-cheating appointees like Treasury Secretary Timothy Geithner didn’t give us an indication of what was coming, the ObamaCare “sausage-making” told us what Barack Obama was about.  One by one, senators were ushered into a back room to be given their bribes for supporting legislation which, for the first time in American history, forced Americans to spend thousands of dollars on corrupt politically correct “insurance” policies which fundamentally violated their religious beliefs.

Using fraudulent budget math which landed Bernie Madoff in prison with a 150-year sentence, Obama deliberately lied to the American people about the cost of insurance, their ability to keep the policies they liked, and the fact that middle income Americans were being bled dry in order to fund other people’s medical care.

Having slammed through ObamaCare with no transparency using parliamentary gimmickry, it was no surprise that the resulting creation was a creaking Rube Goldberg machine.

No matter.  Obama simply ignored the parts of the law which were inconvenient to him, while demanding that the “little people” comply with their obligations, to the letter — or face massive fines.

But if Barack Obama acted like a despot when he controlled Congress, that was nothing compared to his lawlessness after he lost control.

When his politicized Internal Revenue Service was caught trying to destroy his political opposition, Obama stonewalled and used the “dog ate my homework” excuse.  Thus, he argued, an Executive Branch which could suck up meta-data on every phone call in the world somehow couldn’t locate e-mails that, not coincidentally, would have incriminated it.

Obama proceeded to go to war with entire nations without constitutional authorization.  And the result is a conflagration of new terrorist regimes, fallen allies, and hostage beheadings and executions.  It is hard to believe that a President intent on destroying U.S. interests in the world could have done a worse job of safeguarding them.

Not surprisingly, Obama was twice repudiated by the American people, who took both Houses of Congress away from him.

Again, no matter.  If Congress refused to pass his immigration legislation, he would enact it by executive fiat.  If Congress frustrated his efforts to exploit a horrific tragedy in order to pass gun control, he would craft 23 “executive actions” to achieve the same thing.  If the law barred him from demanding sales information from gun dealers or creating a national gun registry, he would do it anyway.

After all, wasn’t it Richard Nixon who said to David Frost: “If the President does it, that means it’s not illegal.”  And nothing happened to him, right?

So we have come full-circle.  A President who places himself above the law and above the Constitution.  And a groveling court system and Attorney General who exist to allow him to do so.

Fortunately, what goes around, comes around.  And there is every evidence that the American people are getting sick and tired of Obama’s lawlessness.  And, with a new administration will come the ability to summarily repeal all of Obama’s unlawful actions — in one fell swoop — at the same time as an independent counsel examines fraud, lies, and illegality in connection with criminal charges.

Perhaps, as Richard Nixon found out, the Constitution is a little more resilient than Obama imagines.

Tim Macy is the Chairman of Gun Owners of America, a gun lobby that represents more than one million members and activists.