On November 4, Montana joined the rest of the nation in sending a forceful message that it was sick and tired of Washington’s lawlessness — and of a President who thinks he is above the law and the Constitution.

Shockingly, Barack Obama’s response to America’s repudiation has not been introspection or remorse, but, rather, an even more ruthless and lawless seizure of power. 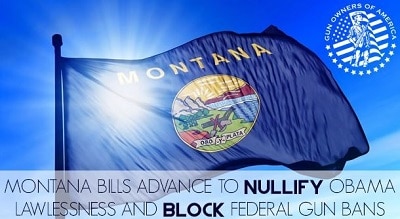 Fortunately, freedom-loving states like Montana are not defenseless against Obama’s petty despotism.  And two bills expected to soon come before the full Montana House will make it clear that Big Sky Country is not going to put up with Obama’s Third World-style governance.

It was the 1997 Montana-generated Printz case that led the Supreme Court to reaffirm the right of states not to be conscripted, against their will, into a federal government regulatory scheme.

The second pro-freedom bill is House Bill 274.  It would require federal officials operating in Montana to get advance written permission of the elected county sheriff before making an arrest, search, or seizure.  Legislative exceptions would allow things like border enforcement, policing in federal enclaves, and “hot pursuit.”

We saw in places like Ruby Ridge and Waco how horribly wrong things can go when arrogant feds, operating outside their element, fail to properly use the expertise of local law enforcement officials with intimate knowledge of the circumstances.

The House Judiciary Committee held a hearing on HB 274 in January.  Let’s encourage Representatives to move this bill through the House and send it over to the other chamber.

ACTION: Contact your state Representative.  Ask him or her to support House Bill 203 (refusal to enforce unconstitutional laws) and House Bill 274 (sheriff-first).

He Thought He Could Stick Up a 67-Year-Old Man Using a Pellet Gun. It Was a Fatal Miscalculation