Now is the time to defeat Barack Obama’s favorite Republican.

We are one week away from the Indiana Primary Election and the possible election of one of GOA’s top target candidates, Richard Mourdock, and the defeat of Barrack Obama’s favorite Republican Senator Richard Lugar. 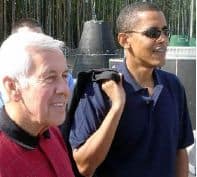 Lugar is so liberal he can’t even be called a RINO — Republican In Name Only. He’s been a disaster on the gun issue, voting to destroy the Second Amendment so many times in his thirty-five years as a Senator, it would take a book to chronicle his bad votes. He may as well be caucusing with Harry Reid and the Democrats because he follows their lead on most issues.

GOA-endorsed Indiana State Treasurer Richard Mourdock is a staunch supporter of the Second Amendment and IF WE CAN GET HIM ELECTED IN THIS PRIMARY, HE SHOULD BE THE NEW SENATOR AFTER NOVEMBER!!

Please help Richard Mourdock now in this last week before Election Day. If you live in Indiana, please find out how you can volunteer to help the Mourdock campaign — AND THEN HELP THE MOURDOCK CAMPAIGN!!!

If you live outside of Indiana, please go to the Mourdock website and make a donation NOW. That’s www.richardmourdock.com.

Paid for by Gun Owners of America.  Not authorized by any candidate or candate’s committee.