McCain may be working to stab us in the back

Senate Majority Leader Harry Reid is still trying to rig the Senate rules so that President Barack Obama can get his anti-gun and anti-Constitution agenda passed.

But first, here’s some good news.

Prior to the New Year, the reports coming out of Washington, DC indicated that Senator Harry Reid was going to nuke the filibuster on the first day of the new Congress (which would have been yesterday).

But Politico, which is one of the official papers of Capitol Hill, reported yesterday that Reid still doesn’t have the votes — despite having a Democrat majority.

This is somewhat good news, as it means that Reid still can’t cram a rules change down our throats, limiting the ability that pro-gun Senators have to filibuster (or kill) anti-gun legislation.

But here’s the bad news:  Reid is working on a “compromise” where certain RINO’s like John McCain will help Reid do his bidding. 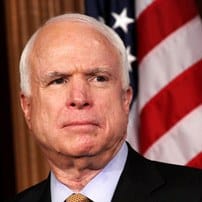 Well, The Blaze reported yesterday that Vice President Joe Biden “guaranteed” to ailing Boston Mayor Tom Menino that sweeping gun control legislation would be passed by the end of January.

A quick look at Feinstein’s semi-auto ban legislation suggests that up to 75% of all handguns currently in circulation would be banned, along with as much as 50% of all long guns.

Depending on its configuration, the AR-15 you already have would probably be treated like a machine gun.  You would have to be fingerprinted, background checked by the FBI, and undergo a six-month license application process to keep it.  And when you die, the government will seize it.

If you don’t get an NFA license, you can expect the SWAT teams to descend on your house.

But, you ask, how could such rabidly anti-gun legislation ever get past Congress?  Well, legislators could simply follow the path they took on the fiscal cliff, where they bludgeoned a minority of Senators into accepting several, coerced short-cuts in regard to the Senate rules.

However, these forced short-cuts would now become mandated and set in stone if Harry Reid & Co. get their way.

Under one new “compromise” being floated on Capitol Hill, the Senate would change its rules so that it could pass a gun ban with only 50 votes (plus the vote of Vice President Joe Biden).  Or legislators could write the gun ban in a House-Senate conference committee on a “must-pass” bill, employing a tactic that is frequently used to pass controversial legislation.  Democrats like West Virginia’s Joe Manchin, Nevada’s Harry Reid, and Pennsylvania’s Bob Casey — who will not have to run for reelection for a while — will cast “courageous” votes for this gun ban.

And it will hit the House with enormous momentum — momentum which House Speaker John Boehner (who has already called for a dialogue on gun control) may not have the courage to resist.

GOA working with Senator Rand Paul to preserve the filibuster

McCain was irritated at Kentucky Senator Rand Paul, who worked with Gun Owners of America on a variety of pro-gun issues that slowed down his defense funding bill.   So McCain would not lose any sleep if his rules “compromise” diminished our ability to kill anti-gun legislation in the future.

McCain is now working with Leftist anti-gun Senator Carl Levin on a series of rules changes to make gun control a lot easier to pass.

The first McCain-Levin rules change would make it impossible to fight — what’s known in Washington as — the “motion to proceed.”  Remember ObamaCare?  Our last real shot to kill ObamaCare was by filibustering the “motion to proceed” to that anti-gun legislation.  Once the motion was adopted, the bill became amendable and Harry Reid could play “let’s-make-a-deal.”  So this change would eliminate our last real opportunity to set up a roadblock and keep anti-gun legislation from even being considered.

The second McCain-Levin rules change would make it easier to add gun control to a bill in conference.  Currently, senators can block a House-Senate conference from considering an anti-gun bill.  But if the McCain proposals are adopted, a “must-pass” bill could be sent to conference … amended in conference with a draconian gun ban … and then sent back to the House and the Senate on a take-it-or-leave-it basis.

McCain will try to tell you that that inserting a gun ban into a bill that is sitting in a House-Senate conference would be outside the “scope of conference.”  But that would be a lie, because as any Senator knows, “scope of conference” rules are never followed.  For example, the Gramm-Rudman spending guidelines were written in conference from the ground up.

The third McCain-Levin rules change would block any amendments except for those offered by Minority Leader Mitch McConnell or Floor Manager John McCain.  All other senators would be left out in the cold.

This McCain-Levin package must be stopped.

We are currently working with Senator Rand Paul, who is planning to offer a GOA-originated amendment requiring a two-thirds vote in the Senate before any anti-gun measure can be passed.

We know.  We know.  If it were up to us, gun control would not be able to be passed with 100 votes.  But we need to propose something which will pass the Senate.

So we need your help in opposing the McCain package and supporting the Paul amendment.

ACTION:  Contact your Senators.  Demand that they (1) oppose the McCain-Levin package to make gun control easier to pass, and (2) support the Rand Paul amendment to require a two-thirds vote to enact gun control.