Gun rights groups are pushing back against a barrage of executive actions that the Biden administration has argued would help combat what it calls a “gun violence public health epidemic.” 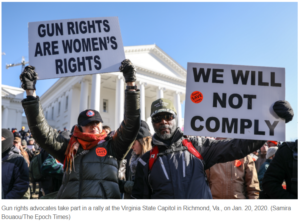 The six initial proposals outlined in a fact sheet released by the White House contain two orders that drew particular attention: a Justice Department (DOJ) rule aimed at stopping the proliferation of “ghost guns,” and the ordering of the DOJ to publish model “red flag” legislation.

The proposals follow the U.S. House of Representatives in March approving a pair of Democratic-backed gun-control bills aimed at expanding background checks….

Biden’s action orders the DOJ to, within 30 days, come up with a rule to help stop the proliferation of “ghost guns.” The White House says criminals can purchase a kit with almost all the components of a gun and finish one in under 30 minutes. They also point out that when such firearms are found on crime scenes, they are hard to trace, as there’s no serial number….

It’s absurd to think that adding a serial number to any number of gun parts will stop criminals from breaking the law or committing murder, said Erich Pratt, senior vice president of gun rights group Gun Owners of America.

“The Second Amendment is not about hunting. Rather, it’s about the people being able to protect themselves against a tyrannical government,” Pratt told The Epoch Times. “And that’s why these regulations are such dangerous infringements.”

Red flag laws turn “our legal system on its head,” Pratt said, arguing that such legislation upends the “innocent until proven guilty” standard, and throws real due process out the window.

Read More at The Epoch Times