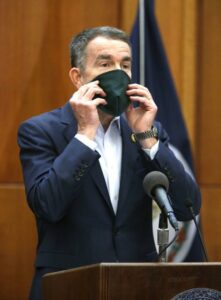 We fought this legislation in the General Assembly this year, both in the House (HB 674 by Delegate Sullivan) and in the Senate (SB 240 by Senator Barker).

Because we face unusual circumstances at present due to the Coronavirus, HB 674, if signed by the Governor, will have many public health and social consequences, which I hope we can lessen to some degree in the Reconvened session.

The alleged rationale for Red Flag laws is that guns should be taken away from individuals identified who are intent on causing harm to themselves or others, but before any harm can be done. However, these laws threaten lives and liberty in many ways.

Among the many problems with Red Flag laws is that they fail to include Due Process protections.

As of today Governor Northam has not signed HB 674 or published any proposed amendments to HB 674.   While we probably cannot stop the passage of HB 674, we might be able to reduce some of the damage HB 674 can set in motion.

Maryland had such an ERPO law.  And already, innocent people have died.

On November 5, 2018, police knocked unannounced on the door of 61-year old Gary Willis of Ferndale, MD, who answered his door while armed.  The police came to inform Mr. Willis (a man they never met at a home they never visited) that he was subject to a red flag order.  When Willis did not drop his gun, the police shot Willis who died at his home.

Killings of innocent U.S. citizens cannot be tolerated.  At a minimum, every American is entitled to Due Process.   Let us urge our Governor to at least add Due Process guarantees as amendments to HB 674.   Unfortunately, we are in the position of opposing dangerous legislation because the Left has been busy registering voters who support the gun control agenda and electing candidates who support their gun-grabbing policies.

Of course, if a majority of candidates win who do not support the Second Amendment, we cannot be too surprised when anti-gun bills pass in the General Assembly and end up becoming law.

GOA needs your help to get the governor’s attention in the next few days.

To be clear: GOA will still oppose this legislation no matter what, and will look for opportunities to challenge it in court.

But given that the legislature has already sent the bill to the governor’s desk, the best we can hope for now — before it becomes law — is to get amendments that will lessen the damage.

So please send the prewritten messages (above) to the governor and your state legislators and urge them to support amendments that will increase Due Process protections for gun owners. Thank you.

Four Reasons Why Americans Are Buying Firearms During COVID-19 Pandemic