SB 240, introduced by Senator George Barker (D), is a so-called “Red Flag” law that allows the confiscation of guns. Of course, in true gun-hating fashion, this would be done without due process and against individuals that SB 240 “predicts” will commit a future gun crime. 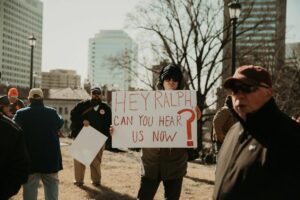 Under this bill, a prosecutor or police officer conducts an undefined “independent investigation,” then petitions a judge to remove for 14 days any firearms owned by an individual who is deemed to be a “substantial risk” to themselves or others.

The accused cannot be present at the initial ex parte hearing. This violates the Sixth Amendment which guarantees one the right to face his accuser and have witnesses in his favor. If you are the accused, SB 240 does not allow you to have your attorney at the hearing, and the accuser cannot be cross examined.

Virtually anyone can bring a complaint to the police or prosecutor: jilted ex-lovers, annoyed neighbors, divorcing spouses, political opponents, fired employees. school personnel, and so on — all without rules of evidence! “Relevant evidence” is enough to remove firearms for up to 6 months at the second hearing.

So limiting the filing of complaints to police and Commonwealth attorneys is not at all a curb on abusive filings.

There is no civil recourse for those wrongly denied their firearms due to false reports. The “criminal cause of action” for false reports is present, but that would require the police and/or prosecutors to publicly admit they were duped.

Since the removal of firearms is a civil proceeding, there is no constitutional right to a court appointed attorney, thus making it more likely that the poor, who cannot afford to hire lawyers, will be especially hard hit by their liberal “benefactors.”

Red Flag laws have a HORRIBLE track record throughout the country

Any legislator who votes for this law is not placing himself in harms’ way, but he is placing the police and sheriffs in harms’ way! They are the ones who will knock on the doors at all hours to remove the firearms from “surprised” persons unaware a hearing was held against him! The accused may not even realize the police have come to remove their firearms!

Under Maryland’s extreme risk “Red Flag” law, on November 5, 2018, 61-year-old Gary Willis of Ferndale, MD, answered his door to police at 5 AM. Police had never met him before or had any reason to visit him, yet he was subject to a so-called Emergency Risk Protection Order (ERPO).

According to news reports, “Willis became increasingly agitated … when they mentioned he’d have to leave the home … he’d shared with his family for 20 years.” When Willis did not drop his gun, the police shot Willis who died at his home. No charges were filed against the police.

Connecticut and Indiana have extensive experience with these ex parte proceedings. In Connecticut, 32% of ERPO orders are overturned, and in Indiana 29% are overturned. But anyone falsely charged could lose his reputation, job, or standing in his community.

It is wrong for legislators who will not face any of these repercussions in their own lives, due to their heightened “stature” as elected officials, to make the rest of us risk a potential “Red Flag” nightmare.

The claim that SB 240 is needed to address suicide is brazenly hypocritical, considering that legislation to decriminalize assisted suicide, HB 1073, was supported by 52 democrats who also supported the House version of this “Red Flag” bill.

Lawmakers need to know that voting to abridge Second Amendment rights will cost them support at election time.

Please take the time to send a pre-written message (above) to your Virginia legislator. Thank you.