Democrats are Trying to Change the Background Check Laws

Handing Your Spouse a Firearm Could Lead to Jail Time

We have more hard gun control fights this week in Richmond! 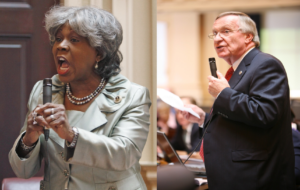 The two bills we are writing to you about would require all firearm sales and all transfers (however minor) to be subject to criminal background checks with long prison terms for benign, innocent acts!

This is yet another payback to NYC Mayor Michael Bloomberg for his $6.2 Million “donation” to Virginia Democrats since 2015!

As introduced, both SB 70 (Lucas-D) and HB 2 (Plum-D) create chaos because the term “transfer” would make harmless actions punishable as felonies and extreme misdemeanors with extensive prison sentences.  Chaos is not “gun safety.”

“Transfer” means “to convey or remove from one place, person to another; pass or hand over from one to another, specifically to change over the possession or control.” Governor Northam’s “Background Check” bills are almost identical to a 2013 federal bill introduced by U.S. Senator Harry Reid (D-NV).

Law professor David Kopel’s following analysis of that bill applies to both of these so-called “Background Check” bills supported by Governor Northam — and all these scenarios would result in jail time:

Each one of these actions is a felony with five years in prison!  Governor Northam calls this “common-sense gun control.”

Governor Northam would penalize a spouse who asks (a five-year felony) her husband (one year in jail) to put her concealed carry handgun in their safe because the grandkids are coming over.

This harmless act will merit the same penalties as those who would knowingly sell handguns to the killer who murdered 11 victims in Virginia Beach or one who killed 34 teachers and students and injured many.  That is ridiculous!

The truth is, someone who is planning a murder, but not yet committed a crime, can easily pass a background check! A Virginia Beach study found that the Virginia Beach murderer of 11 persons “legally acquired several firearms over the past three years” because he had no prior criminal record!

While SB 70 passed the Senate as a “Substitute,” and removed the especially onerous provisions covering innocent “transfers” of firearms, it still prohibits life-long friends from selling guns to each other unless they go to an FFL store to transact a gun sale.

But Delegate Plum’s HB 2 is something out of a Communist gun-regulation manual and still covers all sales and “transfers,” however unjust and weird the provisions!

Neither SB 70 as amended, nor HB 2 as introduced, would solve the problem of straw purchases cited by the U.S. Institute of Justice.

Please use the easy emails GOA has prepared for you to urge your delegates and senators to vote NO on SB 70 and HB 2!