Nullification Bill Passes Out of the State Senate! — Ask your Representative to support the bill

Gun Owners of America wants to thank you for your hard work in contacting your state senator in favor of the Nieves nullification bill (S.B. 613).

This bill has just passed out of the Senate and now goes to the House. 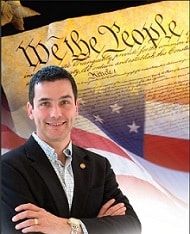 Moreover, the bill also advances gun rights in the following ways, as it:

But that’s not all.  The bill also allows a school district to designate teachers and staff as “school protection officers.” As such, they could carry concealed firearms to protect the school.

There are a lot of great things in this bill.  Let’s work to get it through the House!

ACTION: Contact your state representative and ask him to support S.B. 613, without any weakening amendments.

HOW TO CONTACT-WRITE YOUR STATE REPRESENTATIVE:

* Copy and paste the message below.

I urge you to support S.B. 613 and to oppose all weakening amendments.

A lot of states have moved to defend the Second Amendment in the wake of Barrack Obama’s attacks on it.  But few bills have done such a wide variety of pro-gun things as Missouri Senate Bill 613, introduced by Senator Brian Nieves.

Make no mistake about it: “Nullification” drives the anti-gun nuts crazy. They scream that the nut-left Ninth Circuit court of appeals in San Francisco has overturned a similar law.

Unfortunately for them, the Supreme Court, in the Printz case (1997), held that states like Missouri have an absolute right not to be conscripted as enforcers of a Federal gun control scheme.

Section 160.665 allows a school district to designate teachers and staff as “school protection officers.” As such, they could carry concealed firearms to protect the school.

Had this statute been in effect in Newtown, Connecticut, the horrific tragedy there would never have occurred.

In addition, section 571.012 would protect the Doctor/Patient relationship by insuring that health care professionals are not forced to ask about and keep records on whether a patient owns a gun.

S.B. 613 is a great piece of legislation.  So please support and vote for the bill, and oppose any weakening amendments.