Pick up your phone right now.

Governor Paul LePage (R) will be deciding any day now — perhaps, any moment — on whether to sign Constitutional Carry (LD 652/SP 245) into law.

So please call the Governor and urge him to sign this permitless carry bill into law. GOA has made it easy for you and has provided Talking Points below.

We are so close to restoring the FULL Second Amendment right to carry in Maine. Contact the Governor and finish the fight for constitutional carry! 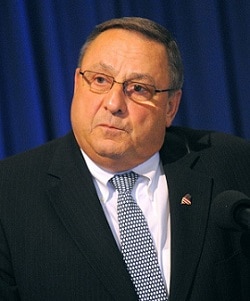 1. There are already seven other states that allow for constitutional carry, and they are seven of the safest states in the country. One of those states is Alaska, which passed its Constitutional Carry law in 2003 and has seen its murder rate drop 20 percent in the ensuing 10 years (according to FBI statistics). Another one of those states is nearby Vermont, which is frequently ranked as the Safest State in the Union!

2. The state police in Maine wholeheartedly support constitutional carry. In fact, over 90% of police nationwide support the principle of concealed carry for law-abiding citizens, according to a PoliceOne.com survey taken in 2013.

3. Maine already has constitutional carry for Open Carry. That is, one doesn’t need to beg permission to carry a handgun openly. So should a person, who is carrying a gun openly, become a criminal for pulling his shirt over his weapon? No, please sign LD 652/SP 245 into law.

4. Finally, it’s important that Gov. LePage realize this bill will not let criminals carry guns. After all, they already carry guns illegally!