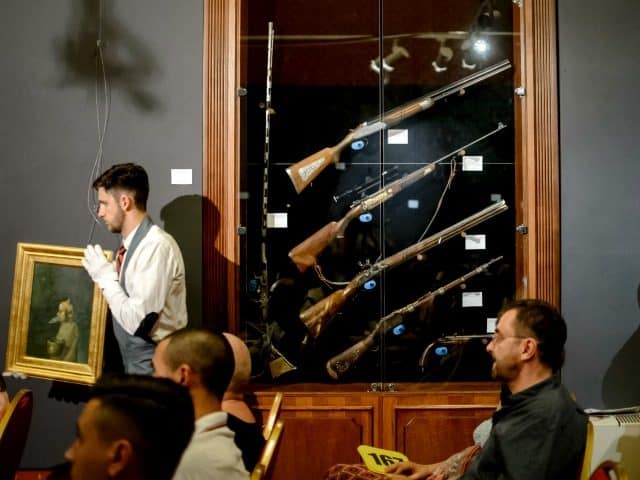 Normal, everyday carry guns can be expensive and AR-15s–and other hunting and sport rifles–cost even more, but one-offs and collectibles owned by the right people in history can surge to values exceeding what many Americans pay for their homes and cars combined.

Think about it this way–one can easily spend $600 to $1,300 for a concealed carry handgun and $1,800 to 3,500 (and beyond) for certain AR-15s and other hunting/sports rifles. And if you jump to machine gun ownership, the price likewise jumps into the tens of thousands of dollars for even median priced weapons.

But when you turn to the one-offs and collectibles, the price goes far beyond guns that are worth tens of thousands of dollars. In fact, the list begins at slightly under a quarter of a million dollars.

Wyatt Earp’s Colt .45 Revolver — The revolver Wyatt Earp is believed to have used during the famous shootout at Tombstone, Arizona’s O.K. Corral garnered a price of $225,000 at auction. Fort Knox Vaults hails Earp as “one of the most well known lawmen of all time,” and points to the price paid for the gun as proof that they are not alone in their sentiment. The single action .45 revolver has continued in popularity from Earp’s day to our own, with one of the most popular models being the Ruger Vaquero.

Teddy Roosevelt’s Fox Company Shotgun — Roosevelt was the 26th President of the United States and an avid hunter and outdoorsman. In 2010 his Fox Company shotgun sold for $862,850. The gun was used by Roosevelt on African Safari and the NRA Blog reports that the shotgun was clearly identified as Roosevelt’s via the “packing manifests for the voyage” that carried the men to Africa. Moreover, the “gun came straight from the Roosevelt family.” Roosevelt’s shotgun broke down to be boxed much like a Beretta Silver Pigeon 1.

U.S. Army Captain Henry Ware Lawton’s Model 1886 Winchester — Lawton’s Model 1886 sold at auction in May 2016 for $1.2 million. Forbes reported that the historical significance of the gun is that it was gifted to Lawton after he captured “Geronimo, the Apache leader.” The gun bears serial number 1.