That’s why Gun Owners of America is asking every pro-gun person in Nevada to sign our Adam Laxalt for Governor petition, and also, to send this email alert to every one of your pro-gun friends and family so they can also sign on.

As you know, in 2016, Nevada narrowly approved “Question 1” on Election Day – which would outlaw private gun sales in the state – at least without getting an Instant Check through a dealer.

“Question 1” was drafted in the backrooms of Washington and New York, and foisted on Nevada by free-spending New York billionaire Michael Bloomberg, supported by Harry Reid’s corrupt election machine. 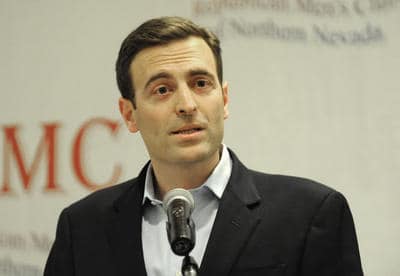 Aside from its obvious unconstitutionality, “Question 1” was a carbon copy of Bloomberg efforts in other states and was replete with laughable drafting errors.

For instance, even on a large piece of private property, you would go to jail for target shooting in your back yard unless your land was licensed as a “shooting range” by the state.

You could go to prison for showing your gun to a friend and then leaving the room.

But the biggest drafting error of all was Bloomberg’s assumption that he could force the FBI to spend money to conduct the private checks on gun sales, without federal money to pay for it.

When the Nevada Department of Public Safety queried the FBI, the FBI replied, correctly, that the Nevada Initiative could not force the FBI to set up a program to conduct Nevada private transaction instant checks, absent federal legislation authorizing and funding such an effort.

That’s when Nevada Attorney General Adam Laxalt (R) issued an opinion that if the FBI won’t conduct the Instant Checks requisite to any private gun sale in Nevada, then one can’t require those Instant Checks for those private sales.

Believe me, if this law had been passed in states like New York, Massachusetts, New Hampshire or Virginia, their respective Attorneys General would not have acted to protect the Constitutional rights of their citizens like Attorney General Laxalt did for the people of Nevada!

And for that, he deserves our respect and help if he runs for Governor in 2018.

IN FACT – WE NEED TO URGE ADAM LAXALT TO RUN FOR GOVERNOR!

That’s why I ask you to sign the petition to draft Adam Laxalt for Governor. And when you do, please also send a contribution to Gun Owners of America to help us in our efforts to make sure Adam is not only the conservative nominee, but the eventual winner in the coming Governor’s race.

We’re not talking about a Second Amendment hero, which Adam Laxalt most assuredly is, but a conservative pro-constitution hero who will lead Nevada in protecting the constitutional rights of all citizens.

And now that the Nevada State Legislature is controlled by the anti-gun Democrat party, it’s even more important that we put a strong, pro-Second Amendment leader like Adam Laxalt into the Governor’s office to veto any anti-gun legislation they may pass!

That’s why it is imperative that you sign the Draft Adam Laxalt for Governor petition, and that you forward this email alert on to your friends and family who also live in Nevada asking them to sign also.

Your signed petition, along with your most generous contribution to Gun Owners of America, will allow us to ramp up the campaign to elect Adam Laxalt Governor and protect your Second Amendment rights.

I urge you to act on this immediately and help us to victory.