Things are going from bad to worse in the Oregon legislature.

Two gun bills moved out of a Senate committee on Tuesday.  The first was originally legislation to protect the privacy of concealed handgun license (CHL) records.  That bill passed only after it was weakened by anti-gun Judiciary Chairman Sen. Floyd Prozanski. 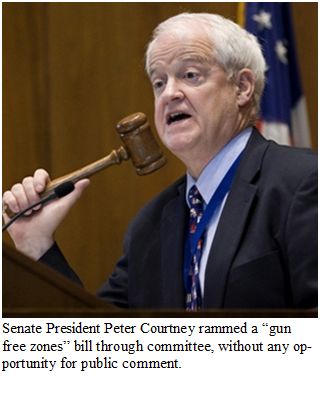 Senate President Peter Courtney then rammed through another bill banning guns on school property.  Courtney introduced the bill a day after the shooting at an Ohio school, which also occurred, of course, in a “gun free zone.”

The Courtney bill will turn you into a criminal if you use a firearm to protect yourself or others at a school, even if you possess a valid CHL.

If Courtney and his antigun Senate colleagues were serious about protecting children, they would repeal laws that prohibit law-abiding adults from carrying firearms on school grounds.

Instead, Courtney and his cronies are increasing restrictions on gun owners.  And his bill even applies to colleges and universities, meaning adult students will also be forced into “criminal safe zones.”

Not only is the language of this bill outrageous, but it also resulted from a despicable process.  The bill, SB 1594, came up on Tuesday and was rammed through committee with NO opportunity for public input.  And it will come to the floor as early as Wednesday or Thursday.

So your IMMEDIATE action is required.  Please contact your Senator right away and urge him or her to vote NO on SB 1594.

You can contact your Senator by clicking here.  You don’t need to know who your Senator is; just type in your information and your message will be sent to the correct Senator.

You can cut and paste the message below:

If Senators were serious about protecting children, they would repeal laws that prohibit law-abiding adults from carrying firearms on school grounds.  Instead, Sen. Peter Courtney is increasing restrictions on gun owners and creating even more “criminal safe zones.”

I am also appalled at the process by which this legislation has come to the floor—with no input whatsoever from the public.

I urge you to vote against this misguided and dangerous legislation.