Pennsylvania is one of those states.

Most people in the state seem to love their guns. They support the Second Amendment and many want to expand the laws to respect residents’ gun rights as they should have been long ago. This is a worthy goal. 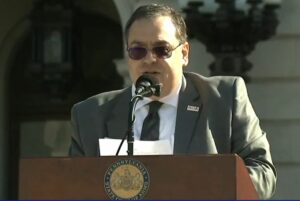 Unfortunately, their governor has been vocal with his support for various anti-Second Amendment efforts throughout the state.

Now, gun rights advocates are calling on the state senate to get off their duffs and advance several pro-gun bills.

Gun rights advocates have their aim focused on the Senate to advance legislation that would free up government restrictions on their right to carry a firearm.

About 50 members of Gun Owners of America gathered on the steps of the state Capitol on Monday for a lobby day to pressure senators to pass three separate bills that are awaiting action in that chamber.

Dr. Val Finnell, the organization’s Pennsylvania director, said despite knowing the bills would likely draw a veto from Democratic Gov. Tom Wolf, the push for a vote in the Senate on the three pro-gun bills is necessary to see where each senator stands on these gun rights issues.

“We want to get a recorded vote,” Finnell said. “We want to put everyone on record on where they stand.”

A pro-gun bill that has advanced the farthest in the Senate is Senate Bill 565, which would eliminate the state’s longstanding requirement of the need to obtain a separate permit to carry a concealed firearm.

In other words, it looks like GOA doesn’t expect the bills to become law, which is good because they’re not. Even if the legislature passed it, Wolf isn’t going to sign them into law and Pennsylvania doesn’t have the numbers to override it.

But by getting everyone on the record now, it lets gun rights activists know which seats to target come reelection time. It puts everyone on notice that groups like the GOA will be watching who votes in which way and will remind voters about who respects their Second Amendment rights and who doesn’t.

This is why you push pro-Second Amendment legislation that you know won’t actually make it into law. You put the other side in the position of having to actually vote against the bills, making it clear that they’re really anti-Second Amendment, no matter what they claim in their campaign literature.