There is a new pro-gun, pro-self defense organization in South Africa, and none too soon. Gun Owners of South Africa (GOSA) was publicly launched on January 26 in Cape Town. It was my pleasure to be on hand for the auspicious event.

South African officials, including Safety and Security Minister Charles Nqakula just days before the GOSA launch, made it clear that the purpose of the new law requiring reapplication for gun licenses was to disarm the public of all legal guns. Nqakula should know since his Ministry is in charge of administering the Firearms Control Act.

This was revealed during the launch by the head of Black Gun Owners of South Africa (BGOSA), Abios Khoele. Khoele electrified the nearly all-white audience with his call to action. Having put to rest that anybody — white or black — could expect to get a renewal for their gun license, Khoele challenged the whites to work with BGOSA in a campaign of massive civil disobedience to get the government to back off.

The socialist government of the African National Congress is concerned about the growing talk that the over 2,500,000 licensed gun owners in South Africa are close to, or beyond the point of, giving up. As a result, gun owners are coming to see that the government wants to disarm them, so they are seriously talking about not bothering to reapply for a license.

With talk of non-compliance already in the air, Khoele’s remarks brought the audience at the GOSA launch to an excited pitch. Khoele pointed out that blacks saw how the ANC came to power, and that BGOSA was prepared to use the same lessons of civil disobedience against the ANC.

Black Gun Owners of South Africa has already put feet to that claim. Last year, BGOSA gathered more than 8,000 blacks outside the government buildings in the South African capital of Pretoria. When threatened with arrest, Khoele invited the black police to do to a black crowd what the white Apartheid police had done to blacks. No arrests were made.

If Khoele were to repeat last year’s demonstration with the addition of a large contingency of whites, the gun grabbers of South Africa would be hard pressed to continue.

The biggest danger could come at that point. A few days prior to the GOSA launch, I saw how capably the government attempts to shift the frame of the debate. The idea is to set the terms so that “You lose, I win.”

I was on the stage at a GOSA conference near Johannesburg when a chief of police arrived (late) to take part in the conference. There are seven metro police districts in South Africa. Robert McBride, the chief of the Ekurhuleni Metro near Johannesburg, put on a masterful, but unsuccessful demonstration of how to neutralize one’s opponent.

McBride, an ANC member, told the attendees that they all had to stop talking past each other. He continued that the gun control debate was not an ideological issue, just one of how to best implement the relicensing law. He added that it was not helpful to keep comparing gun control in South Africa to what had led up to the genocides in Rwanda, Cambodia and Hitler’s Germany. Such talk prevents him and others in the ANC who support gun ownership from defending licensed gun owners. (Yeah, right!)

I actually met many gun owner activists in South Africa who had read Confrontational Politics by GOA’s founder and chairman, retired California state Senator H.L. Richardson. People who have read and begun to apply the lessons of Richardson’s book are not likely to fall for the rhetorical traps of the likes of Chief McBride. Certainly those at the GOSA conference who heard Chief McBride were not buying (with perhaps a couple of exceptions).

But other gun owners in South Africa are convinced that they can “make the law work.” In talks with the government they have been trying to carve out at least an exception for their own particular fraternity within the larger gun owning population. The government is playing them along to divide and conquer. What these gun owners do not understand is that the government is dead serious about disarming ALL legal gun owners.

After the meeting I learned that Chief McBride was quite the expert in criminal activity. As an ANC operative before the Apartheid government was replaced by the ANC, Robert McBride bombed a bar in the tourist area of Durban, killing three young women. After the ANC took over, McBride was arrested in Mozambique on gun running charges. He was released after sitting in jail for a couple of months. Now he is a chief of police.

I can foresee that if Abios Khoele, along with GOSA, and say, white farmers, are successful in getting the ANC government to cry “uncle,” the tactics employed by McBride at the GOSA conference would be attempted again. The ANC will say something such as, “Hey, you guys don’t have to shut down Pretoria. Besides, if you don’t stop doing that, you will just hurt your cause. Look, everybody take a deep breath, your thousands all go home, and we’ll talk.”

Of course, the only answer at that point from gun owners has to be, “Talk about what? About how fast you are going to get rid of the Firearms Control Act?”

The government’s justification for targeting the guns of licensed gun owners is that gun owners have been too careless, and they have been the source of all the illegal guns in South Africa. However, none of the government types can explain why illegal guns are now more plentiful in England after the 1997 confiscation of almost all registered guns in the country. There simply are no legal gun owners left to blame, yet the police estimate that there are some 3,000,000 illegal guns in England. (“Only” 1,500,000 firearms were confiscated in 1997.)

As in the United States, gun banners are simply unwilling (and unable) to deal with the mountains of data that disprove their arguments. Maybe they are really not concerned about crime after all. If that is the case, maybe we are getting close to understanding why they don’t want opponents to keep bringing up countries where gun control led to confiscation and was then followed by genocide. Do you suppose that is what terrorist-now-police-chief McBride has in mind when he wants no talk of Hitler and Pol Pot? 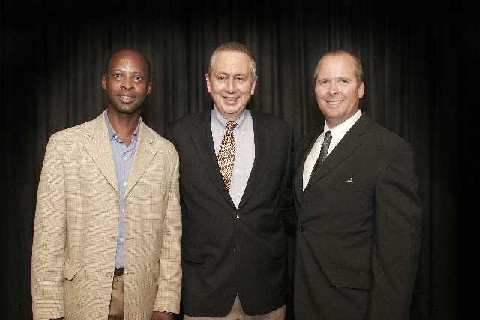 Moving Toward The Election