New Hampshire leads the way to reject all gun control!

Rep. Burt Urges the President to Reject All Gun Control 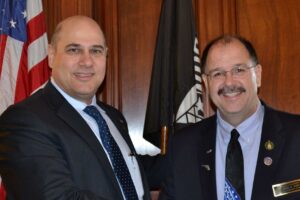 He is the one who famously warned during a debate on a gun-free zones bill that if the bill were to pass, there would be school shootings in New Hampshire.

And when that happens, he said, “there will be dead children. And the blood of those children will be on the hands of these people.”

Like the staff at Gun Owners of America, Burt lives the Second Amendment daily.  He owns, carries and uses firearms — just like we do.  His main purpose: self-defense.

So it came as no surprise when he told us that he sent a letter to President Trump urging him to reject any form of gun control — from expanding background checks to banning guns and magazines to so-called “red flag” gun confiscation.

You can read the Burt letter here.

If either of these bills is enacted into law, they will go a long way towards making Americans safer.

But sending a letter to the White House was not enough for pro-gun Rep. Burt; he got 71 other New Hampshire State Representatives to co-sign it.

I’ve been involved in firearms civil rights issues for over thirty years and I can tell you there are many officials who, after elected to office, vote to protect the Second Amendment.

Sadly, there seem to be many more who promise to defend our rights and then break that promise.

But there are very few like Rep. John Burt who lead the fight to defend our rights and motivate others to get involved.  He deserves our thanks and gratitude.

Despite the recent distractions of impeachment, the radical Left has not given up.

They are waging an all-out war on our freedom, liberty, and ability to take responsibility for our own defense against violent criminals. Especially since the courts have repeatedly ruled that the police have no duty to provide protection services to citizens and cannot be held liable for failure to do so.

So please let your State Reps know that you support Representative Burt (above) — and urge them to send a similar letter to the White House opposing all gun control.

Let’s let President Trump know that America’s gun owners oppose additional restrictions on our gun rights — and that not even one word of gun control is acceptable.