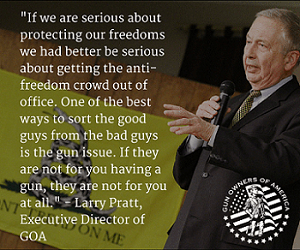 On August 20, Gun Owners of America executive director Larry Pratt described the Democratic Party on the federal level as “increasingly” tyrannical and focused on passing laws to take guns away from law-abiding Americans.

Pratt said, “The Democrat Party has increasingly become a party of tyranny. And you can’t be a good tyrant if there are a whole bunch of schlubs running around with guns.”

But this push has been consuming the Democratic Party for longer than the last three years. For example, on September 13, 2014, the New York Times admitted that Democrats literally made up the term “assault weapons” in order to create an entire class of guns that they could then try to ban.

Moreover, the Times pointed out that …