America Is Pushing Back

America Is Pushing Back

The more that some public officials overstep their authority, the more that voters — and others — are stepping up and saying, “Stop!”

The 2014 congressional elections represented a collective shout by voters to politicians and bureaucrats to back off.  Way off.

Consider the case of Arnold Abbott, a 90-year old involved in feeding the needy at the Sanctuary Church in Fort Lauderdale, Florida.  This “scofflaw” is a serial free food dispenser to the poor who come to his church for meals. 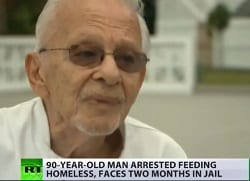 Abbott was arrested by the Ft. Lauderdale police for his supposed threat to the peace of society.  During the arrest, an officer shouted to Arnold, “Drop that plate right now!”

You read that right.  Arnold was not told to “Drop that gun right now,” but rather “to drop that plate!”  Onlookers were outraged and shouted: “Shame on you!” to the officers.

Arnold has beaten the city before in court, and expects to see them in court soon on their new law making his charitable activities a criminal offense.

Ideally, the Broward County Sheriff would inform the Ft. Lauderdale police that they would be arrested if they attempted to arrest Mr. Arnold.  So far, that has not happened.

In other counties, however, sheriffs have interposed themselves between their people and the threat of rogue power from wayward officials.

America’s history illustrates this on a grand scale. Our War for Independence quickly grew from militia encounters to armed resistance directed and financed (however fecklessly) by the Continental Congress.

In the last century, veterans returning from World War II found that their city of Athens, Tennessee was controlled by a very corrupt machine.  When the August, 1946 Democrat primary election (the only election in town) was literally stolen (the police walked off with the ballot boxes), the armed people of McMinn County rose up and rousted the corrupt regime.  Clean elections then gave a victory to the reform slate.

In Elkhart County, Indiana, the people have elected a Constitutional Sheriff who has had occasion to interpose himself between the Food and Drug Administration and a county dairy farmer. The FDA was threatening to confiscate the farmer’s dairy equipment because they don’t like raw milk — even though they can point to no problems.  Elkhart Sheriff Brad Rogers threatened to arrest any FDA agents making further visits to the farmer’s property.  End of the FDA threat.

The voters of Elkhart County indicated their strong support for Sheriff Rogers’ interposition.  He was just reelected with 75 percent of the vote.

Rogers’ warning to the FDA has kept the peace in Elkhart County.  Let us hope the time will come soon when Broward County will have a sheriff who understands his role as a keeper of the peace against the Ft. Lauderdale food police.

Larry Pratt is the Executive Director of Gun Owners of America, a grassroots gun lobby with a million members and activists.