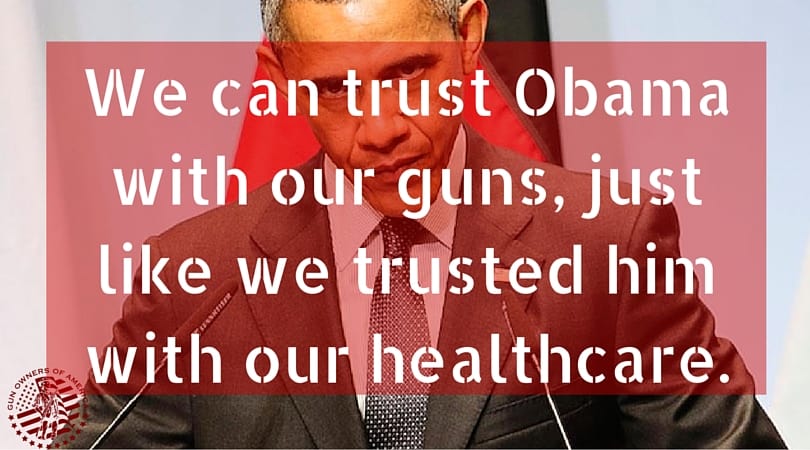 The Gun Owners of America is openly urging members to elect a “pro-gun president” who will roll back Obama’s executive actions and is pushing to defund enforcement.

The offensive includes a series of videos, newspaper ads and email alerts from the NRA, the Gun Owners of America and the National Shooting Sports Foundation in an effort to swing public opinion against the measures….

Groups are turning to every outlet to get their message out to supporters.

The Gun Owners of America claims it has appeared on “more than a thousand media outlets” and “dozens of talk shows” since Obama unveiled his gun actions earlier this month.

One alert called on gun owners to “hit Obama where it hurts.

Another has a “Star Wars” theme. “Obama has declared war on gun owners … it’s time to strike back against the empire,” it says while depicting Obama holding a lightsaber….

The gun groups are also working to make opposition to Obama’s gun actions a litmus test for any Republican candidate with GOP voters poised to hit the polls.

The Gun Owners of America is openly urging members to elect a “pro-gun president” who will roll back Obama’s executive actions and is pushing to defund enforcement.

“The easiest solution is to elect a pro-gun president,” the group states in an email alert.

“While several presidential hopefuls have already indicated they would repeal Obama’s executive actions if elected, the GOA-endorsed candidate, Ted Cruz, has promised to erase Obama’s gun control legacy,” it continued.

Many candidates have been quick to vow they’ll repeal Obama’s actions if they win the White House.

Gun rights groups hope their efforts will “create enough momentum” for a Republican president to repeal the measures, according to Erich Pratt, executive director of the Gun Owners of America.

“We want to make enough of a push that the Obama administration retreats on this — as they did on the bullet ban — or where the next Republican president says, ‘This is a no brainer, it’s one of the first things I will do, repeal these executive actions,’” Pratt said….

Pratt likened Obama’s promises that legitimate gun owners can keep their firearms to his broken vow that the public could keep their health plans under ObamaCare.

Read More at the Hill