Not Ready for Prime Time

Not Ready for Prime Time
by Tim Macy

You have to admire anyone who calls out the President of the United States to his face, criticizing his train wreck that is universally known as “ObamaCare.”  Dr. Ben Carson catapulted himself into national prominence when he confronted the President on this issue at the National Prayer Breakfast in 2013.

As a result of that one act, Dr. Carson is being considered as a potential presidential candidate.  His gentle, avuncular manner makes him all the more attractive.  But let’s do a little vetting before we go all in.

From a review of some of his public statements, it is clear that he is developing his positions on the issues on the fly. 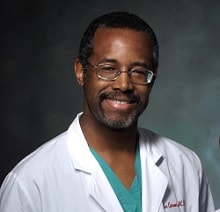 Glenn Beck hosted Carson on his show in March last year.  He told Beck that whether you should be allowed to own a semi-automatic firearm should depend on where you live.  If you’re out in the country by yourself, that’s OK, but in urban areas, “I’m afraid that the semi-automatic weapon is going to fall into the hands of a crazy person, I would rather you not have it.”

Carson drew an analogy to driver’s licenses, saying that just as we license drivers because of our concerns for safety, so licensing of firearms owners should be contingent on demonstrating safe handling.

Of course, this flies in the face of the clear intent of the Founders’ intent that private ownership of firearms be protected so that the people would have the means to resist tyranny from government.

Carson now admits, as of March of last year, that he has changed his mind and is against registration of firearms because the government could use such a list to confiscate guns in a time of financial crisis.  Gone now seems to be the earlier implicit assumption that government can be trusted.

In a November, 2014, conference call to supporters, Carson further walked back his earlier Second Amendment views and said that “under no circumstances” would he “allow a bureaucrat to remove any law-abiding citizen’s rights for any kind of weapon that they want to protect themselves.”  Gone now is the rural/urban distinction that had earlier encumbered his statements.

Dr. Carson is moving in the right direction, but many Second Amendment supporters have great hesitation because of his previous positions that were uttered in the not-so-distant past.

The standard for judging any gun control law is the Constitution.  So a truly pro-gun President would realize the Second Amendment protects gun rights from all “infringements.”  This means there is no room for compromise — no background checks … no gun bans … no ammunition restrictions … nothing.

“Shall not be infringed” means what it says.

Gun Owners of America surveys every presidential contender, asking them if they would work to repeal specific gun bans and background checks (like the Gun Free School Zones Ban of 1996, the Brady Act of 1993, the Gun Control Act of 1968, and more).  And we determine if candidates are willing to oppose new restrictions (such as limiting the size of magazine capacity, UN gun control, etc.).

Whether Mr. Carson will go on record to answer these pointed questions — committing himself in writing to jealously guard our Second Amendment rights from all “infringements” — will go a long way in telling gun owners that he really does support their issue.

Until then, he may not be ready for prime time.

Tim Macy is the Chairman of Gun Owners of America, a gun lobby that represents more than one million members and activists.