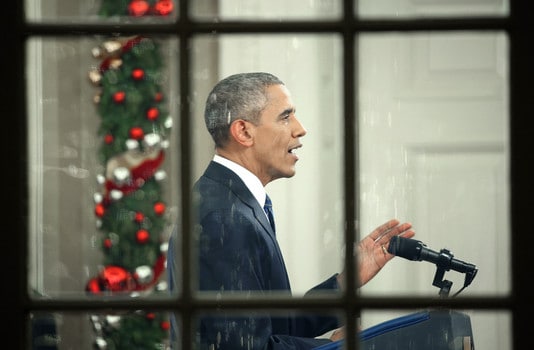 As stated by Gun Owners of America and SCOPE NY in their lawsuit Pratt v. Lynch, Federal agencies have provided private and personal infomation about gun owners to private contractors and foreign nations. According to Stephen Aldstadt of SCOPE NY,

“The ATF is under a legal obligation to protect our personal information when we go to a dealer to purchase a firearm and to purge that information after the background check is completed. Instead, the ATF, the FBI, and the TSC have been freely sharing the information for more than ten years, including with foreign governments and private contractors.”

Additionally, not one of the proposals that may be enacted by Executive fiat next week would have stopped any mass shooting that has occurred in the nation over the past several decades.

With the start of a new year, tens of millions of Americans will make resolutions to change. Millions will improve their health, defeat additions, improve their finances, and/or expand their knowledge. President Obama also will be making a resolution. In his case it will affect every American – potentially for decades to come.

As has been widely reported on January 1, 2016, President Obama plans to use his expanded powers of Executive Orders to create new gun restriction legislation without the consent of Congress. Ostensibly the reason is to increase the safety of Americans, and reduce the risk of mass shootings like the San Bernadino terrorist shooting in December 2015. Yet, taking an honest look at what is being proposed, the result fails to achieve these lofty goals.

Since October 2015, President Obama has had his legal staff evaluating how new gun restriction legislation – specifically focused on increased background checks – can be implemented without using the constitutional process of Congress creating new laws. Given that President Obama is in the lame-duck portion of his Administration, and is therefore losing political power and influence daily, and that the public as well as the Republican led Congress is loathe to attack the 2nd Amendment in the manner desired by the far-left, Executive Orders are the only option available to the President. Thus far the focus has been on increased regulation over individual gun owners possession and transfer of firearms – regulations first considered 2 years ago and abandoned over concerns of legal challenge.

The Obama Administration is seeking to force individual Americans to be registered and licensed by the Federal Government (specifically the Bureau of Alcohol, Tobacco, Firearms and Explosives) to be able to purchase or sell firearms. Current legislation, 18 U.S.C. § 921(a)(21)(C), states that individuals are exempt of registration requirements if they are,

In addition, the Obama Administration hopes to publish aggregate background check denial data for guns sold by unlicensed sellers as well as enforce existing law to identify and arrest criminals who buy illegal firearms. Anti-2nd Amendment advocates are pushing to go even farther. They hope to have the President also push for lawsuits against gun manufacturers and using federal intervention in private markets to pressure gun manufacturers.

But in an objective analysis, the reality is that beyond propping up the legacy of President Obama and indulging the egos of the far-left, none of these gun restriction proposals will equate to an increase in safety for the average American. Which says nothing of the alleged violations of 4th Amendment privacy for existing background checks. As stated by Gun Owners of America and SCOPE NY in their lawsuit Pratt v. Lynch, Federal agencies have provided private and personal infomation about gun owners to private contractors and foreign nations. According to Stephen Aldstadt of SCOPE NY,

“The ATF is under a legal obligation to protect our personal information when we go to a dealer to purchase a firearm and to purge that information after the background check is completed. Instead, the ATF, the FBI, and the TSC have been freely sharing the information for more than ten years, including with foreign governments and private contractors.”

Additionally, not one of the proposals that may be enacted by Executive fiat next week would have stopped any mass shooting that has occurred in the nation over the past several decades. An example is the San Bernadino shooting, which occurred in California where enhanced background checks and behavioral detection programs already exist (among other 2nd Amendment restrictions). As stated by John Cohen, former counterterrorism coordinator at the Department of Homeland Security,

“The point is we need to understand that our traditional counterterrorism capabilities may not be sufficient to pick up on these threats.”

Enrique Marquez Jr. was indicted December 30, 2015, on conspiracy to aide a terrorist act for his actions related to the San Bernadino shooting. He was responsible for buying 2 of the firearms used in the attack, and purchased them in 2011. Neither the existing California background checks, the behavior indicator training of law enforcement, nor the new proposed Executive Orders, would have prevented the purchases or providing the firearms to the San Bernadino shooters.

At the same time the proposed ban on firearm purchases for those on no-fly and terrorist watch lists, would not have prevented Mr. Marquez from his actions – even though Mr. Marquez was reportedly radicalized at some point after 2005 – since neither he nor the San Bernadino shooters were ever placed on any list. Even the alleged plot to commit a mass shooting in 2011 or 2012 at the gun free zone of Riverside City College would not have led to law enforcement intervention as this too failed to register on any list, nor violated any existing or proposed law.

Given the reality, the conclusion is exactly what Vice President Biden stated to news media in February 2013 (that largely failed to be cited at the time or since) as per video shown by Erin Burnett of CNN,

“Nothing we’re going to do is going to fundamentally alter or eliminate the possibility of another mass shooting or guarantee that we will bring gun deaths down a thousand a year from, from what it is now.”

Therefore, since the proposed gun restriction legislation is ineffective as well as subverts the constitutional right of Due Process in a manner that invalidates Congress and the people as highlighted by Rep. Trey Gowdy of South Carolina, a question must be asked of President Obama. What is the actual purpose of these Executive Orders? This becomes even more critical when consideration is taken to observe that existing law is already not being enforced and thus endangering lives of citizens. If existing laws and Executive Orders have not prevented mass shootings, why would a lame-duck President seek to increase the burden on law abiding citizens?

Perhaps equally important is the question of why a different approach to mass shootings are not being pursued? Since the 23 Executive Orders enacted unilaterally by President Obama in 2013 have failed to provide enhanced safety for American citizens, as promised by VP Biden, and the very background checks mandated by California that are being sought to become a national requirement equally failed, logic should kick in and suggest that a different law or regulation may be more adequate. But the Obama Administration is singly focused on doubling down on failed policy. Who benefits from this action?

New Year’s resolutions are a tradition meant to signal a step to self-improvement. In the case of President Obama, his partisan objectives imposed on 300 million Americans, is the definition of a superficial gain for the benefit of a political minority at the expense of inalienable rights chipped away in a process previously unheard of.

Sheriff On Deadly Home Invasion: If You Break Into Someone’s Home, “You Can Expect To Be Shot In Polk County”