Anti-Gunners Attempt Stunt to Pass UBCs Without a Vote

In response to the recent tragedy in Oakland County, Michigan, what did the anti-gunners do?

Following their standard course of action, they are politicizing the deaths of four high school teens in an attempt to undermine your constitutionally-protected rights.

In fact, bowing to the will of their far-Left overlords, anti-gun senators are bringing H.R. 8 to the Senate floor—which is a bill to institute Universal Background Registration Checks (UBCs).

And to make matters worse, they are trying to do this by unanimous consent—without an actual vote.

Please, contact your Senators and make sure they know you’re opposed to H.R. 8 and demand they promise to oppose the bill.

Late on Wednesday afternoon and well into the evening, GOA’s team began rallying the troops on Capitol Hill. 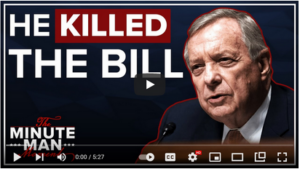 In response, many pro-gun senators began placing “holds” on the bill to keep it from passing.

But tomorrow, you can expect the anti-gunners to walk down to the Senate floor and continue their stunt by using a parliamentary tactic called “Live Unanimous Consent” or Live UC.

Gun Owners of America worked with Senator Braun and Representative Michael Cloud to Live UC a pro-gun bill earlier this Congress, and you can watch our Minute Man Moment Episode about it here if you want to watch the process in action.

Basically, if an anti-gun Senator walks down to the floor tomorrow and asks the Senate to pass H.R. 8 by unanimous consent, and there is no pro-gun Senator on the floor to object, then gun control would pass.

Gun Owners of America expects at least one pro-gun ally to meet the anti-gunners on the Senate floor and stop this whole anti-gun charade.

But it’s still important that the grassroots get involved.

It’s our goal to get you, the grassroots activist, the tools you need to fight back against the nonsense in Washington, D.C.

So please, use GOA’s action alert tool and let your voice be heard! Tell your Senator that you are opposed to Universal Background Registration Checks and that they should be too!

Like I said, GOA’s team is on top of things in Washington D.C. and is working overtime to make sure there is a pro-gun Senator there to object to this madness when it happens.

But I hope you can see how critical it is to be vigilant when defending your constitutional rights.

Even if your Senator is an anti-gunner through and through, send them an action alert and chastise them for undermining the Bill of Rights.

Hopefully, your Senator was one of GOA’s allies who today helped the cause of freedom by placing what’s known as a “hold” on the bill, which would prevent it from quickly passing. Knowing which Senators placed “holds” is private information, but if you ask a Senator’s staff, they might let you know.

So if your Senator is one of the pro-gunners, send him or her a big thank you from GOA!

You’ll never know unless you contact your Senator and ask!