Click here to view GOA’s Congressional Ratings. Please use this to help guide your trip to the voting booth, and then distribute it to your pro-gun family and friends!

Imagine having a President that did not believe the Second Amendment protects an individual right. Or a President who believes that’s it’s okay to confiscate millions of commonly-owned firearms. 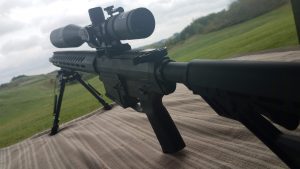 That is precisely what gun owners would be facing if Joe Biden is elected President. Yes, we suffered two notable setbacks over GOA’s strong objections during the past four years, namely “Fix” NICS and Bump Stocks. But had Hillary Clinton won, gun owners would have suffered many more losses than this.

In fact, gun owners can be certain that none of the GOA policy goals would have been achieved under a Hillary Clinton Administration – and many of these successes would be undone by a Biden-Harris Administration.

So here are the top ten highlights that gun owners can celebrate from the past four years:

Victory #1. President Trump nominated and confirmed two (soon to be three) pro-Second Amendment Supreme Court Justices and over 200 pro-Second Amendment Federal and Circuit court judges. The impact of this action cannot be overstated. Barring the Left’s plan to pack the Supreme Court, the confirmation of these judges and justices will enshrine our right to keep and bear arms as our nation’s precedent for generations to come.

Victory #2. President Trump recently renewed his promise to sign Concealed Carry Reciprocity if Congress put such a bill on his desk.

Victory #3. The Trump Administration worked closely with Gun Owners of America during the early days of the COVID-19 pandemic. Responding to a letter from GOA, the Department of Homeland Security issued a memo designating the firearms industry as “essential business.” Because many states directly referenced the DHS guidelines for “essential business,” many gun stores were immediately protected. In other states, this DHS designation became an essential tool for GOA when fighting to overturn unconstitutional state shutdown orders.

Victory #4. President Trump directed his administration to restore your right to keep and bear arms on over 400 lake and river projects, totaling over 11 million acres of public lands in 43 states.

Victory #5. President Trump kept his campaign promise by signing House Joint Resolution 40 into law, which rejected a final rule submitted by the Social Security Administration. Without the President’s actions here, an estimated 75,000 otherwise law-abiding citizens would have had their names submitted to the NICS system as prohibited persons each year.

We will never allow foreign bureaucrats to trample on your Second Amendment freedom. This treaty threatened your […] rights. […] Under my administration, we will never surrender American sovereignty to anyone.

Victory #7. President Trump empowered his administration officials to repeatedly attempt to allow Defense Distributed to publish 3D printed gun files. While the Obama Administration began this infringement, the Trump State Department settled the lawsuit in 2018, allowing for “unlimited release.” Unfortunately, several states’ attorneys general filed a lawsuit and won an injunction against the opposition of the Trump Department of Justice. The case is currently pending.

Victory #8. President Trump’s Department of Justice filed an Amicus Brief with the Supreme Court in the case New York State Rifle & Pistol Association v. New York City in support of the defendants. While the high court dropped the ball with the case, the Administration’s brief was a huge show of support for the individual right to keep arms.

Victory #9. President Trump’s Administration successfully completed a modernization of export control regulations on the American arms manufacturing industry. It also removed a regressive federal registration fee of $2,250 that small gunsmiths and firearm companies were forced to pay even if they did not manufacture, or export firearms or ammunition. This was a huge win for small gun businesses and the firearms industry.

Victory #10. GOA opposed the passage of the unconstitutional Fix NICS legislation from start to finish. In response to GOA’s hard-hitting criticisms of Fix NICS that gun owners with unpaid out-of-state parking tickets would be subject to a federal gun ban, President Trump moved to redefine the ATF’s interpretation of the prohibited person category, “fugitive from justice.” This resulted in the successful elimination of tens of thousands of names from the NICS background check system.

Instead of facing vehement and unrelenting assault by a Hillary Administration, gun owners were handed this series of public political victories over the last four years.

No, we did not get Concealed Carry Reciprocity or pass the Hearing Protection Act, but we also have not sent the majority of pro-gun elected representatives we needed to Washington D.C.

So, get out there and vote on November 3rd!