ME: Susan Collins is Dangerously Close to Voting Your Rights Away

GOA has determined that Senator Collins (R) and Senator King (I) are very likely to vote for gun control in the coming days/weeks. 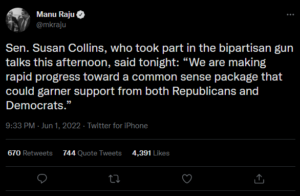 In the press release on her website, Sen. Collins asks the FBI for their opinion on Maine’s Red Flag Gun Confiscation: “I want to ask you about one approach that’s been taken and get your judgment about it. The State of Maine is among some states that have enacted statutes that we call either a red or yellow flag law. … In your experience, how successful have these relatively new red flag and yellow flag laws been?”

We know that Red Flag gun confiscation does not work, and it would be very dangerous to all law-abiding citizens to have this legislation at the federal level.

Red flag laws are ineffective, as many states that have them (like New York) still experience mass shootings.

These gun confiscation laws throw due process out the window, given that firearms are taken from gun owners before they ever have their day in court. And these laws have resulted in honest gun owners being shot by police, after they show up in the early morning hours to confiscate firearms.

After this discussion with the FBI and her private meetings with the anti-gun left, Collins is reportedly very close to an agreement with the anti-gun Left on bills that will hinder your rights. Susan Collins said: “We are making rapid progress toward a common sense package that could garner support from both Republicans and Democrats.”

We need to generate more heat than before and really put the pressure on Susan Collins to stand up for your rights. Otherwise, this will lead to a HUGE blow against the Second Amendment.

Please take immediate action and urge Senator Collins and Senator King to OPPOSE all gun control that comes from these talks!

And if you have the time, please call Senator Collins’ office at (202) 224-2523 to double down on the message that gun control is not the solution.