Florida advertises itself as one of the freest states in the union, as stated by Governor Ron DeSantis (R) on January 11 during his State of the State address to the legislature. In reality, Florida’s political freedoms are much like Walt Disney World. A lot of it is make believe and misdirection.

Twenty-one states have passed constitutional carry laws and another four to five are on the cusp of political victory on that front this year. Florida, it appears, isn’t one of them.

Furthermore, Florida is one of three states that have an outright ban on the open carry of firearms. Yes, you read that right. Florida is right there with New York and Illinois in outright banning the openly carrying of firearms (except in certain limited situations).

For two decades, Florida has had a Republican supermajority ruling both the legislature and the governor’s mansion, yet the Sunshine State has fallen far behind other states on Second Amendment-related issues. From 2010 to 2020, for example, campus carry, open carry, a constitutional carry bills have died repeatedly in Republican-controlled committees.

Yet in 2018, following the Parkland shooting, Republicans rushed a gun control bill to then-Governor Rick Scott’s desk. These were gun rights restrictions, mind you, that wouldn’t in any way have prevented that shooting since the failures there lie squarely at the feet of the Broward County School Board and the Broward County Sheriff’s Office in their refusals to arrest Nikolas Cruz for the multiple infractions and breaches of the peace, including cases of domestic violence.

Governor Ron DeSantis said in December 2021 that he would sign constitutional carry into law if a bill reaches his desk. During the State of the State address he said the following . . . 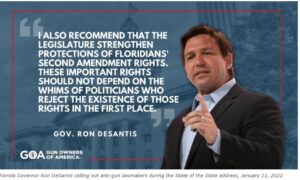 He made no direct mention of constitutional carry, but that was a subtle callout of the anti-gun Republicans who make up the legislature.

Governor DeSantis is stuck between a rock and a hard place. He fully backs the ideas of liberty and freedom. But the legislature holds the cards here and if he wants anything passed, he has to play their game.

So who are some of the lawmakers he was calling out?

Republicans like current Senate President Wilton Simpson (R), the lawmaker who authored the Parkland gun control bill, along with House Speaker Chris Sprowls (R), a loyal underling who is at Simpson’s beck and call.

It’s been through their actions that they threaten other Republican lawmakers and make them cower and stay silent on the matter. Other lawmakers like Representative Cord Byrd (R), who during the 2021 session, killed a constitutional carry bill by refusing to bring it up for a vote when he was chairman of the House’s Criminal Justice & Public Safety Subcommittee.

Currently, Representative Chuck Brannan III (R) chairs that committee, where this year’s version of constitutional carry is assigned. Already, the same excuses are spreading through the halls of the State Capitol as an explanation as to why the bill won’t be brought up in committee for a vote.

So, will 2022 be yet another repeat of the past decade-plus of disappointment? The truth is simple. Republican leadership can bring the bill up if they want. They simply haven’t.

On a more practical and political level, the current permitting system is rife with abuse and issues of mismanagement. During the 2020 pandemic, the Department of Agriculture & Consumer Services refused to process new and renewal applications or issue carry permits for three months. Yet the vast majority of the process can be done online. The department even shut down the state’s website, but kept other online applications websites open during the pandemic.

Additionally, law-abiding Floridians are being treated as guilty and are being made to prove their innocence when they apply for a permit if they happen to share a name or a birthday with a convicted felon in another state. This is happening because the current Commissioner of Agriculture, Nikki Fried, is a proud anti-gun advocate who uses every tactic available to her to deny and delay the issuance of permits.

Also, the entire permitting system is a holdover from Jim Crow era laws. After the Civil War, when the Union Army withdrew at the end of Reconstruction, bigoted southern Democrats regained control of the legislature and re-wrote the state constitution and passed permitting laws to disarm freed blacks.

“The statute was never intended to be applied to the white population and in practice has never been so applied.”

“It is a safe guess that more than 80 percent of the white men living in rural sections of Florida have violated this statute. It is also a safe guess to say that not more than 5 percent of the men in Florida who own pistols and repeating rifles have ever applied to the Board of County Commissioners for a permit to have the same in their possession and there has never been, within my knowledge, any effort to enforce the provisions of this statute as to white people, because it has been generally conceded to be in contravention of the Constitution and non-enforceable if contested.”

The stains of Jim Crow still blot our state, as we saw when Dale Norman, a law-abiding Black man was walking down the sidewalk and had an accidental exposure of his firearm that he was legally carrying under Florida’s laws. He was aggressively forced to the ground by three officers at gun point.

If Florida had constitutional carry, this never could have happened. Under the current system, Florida’s law enforcement is trained to treat anyone with a firearm as a potential criminal since it is illegal to carry a firearm without a government-issued permission slip. I recall from my time as a law enforcement officer that there was little to no training on people having the right to keep and bear arms.

The current permitting system also discriminates against Floridians on the lower economic rungs of our society. It costs on average $119 in government fees to get a carry permit. That doesn’t including the training class fees the state mandates. The usual costs range between $50 to $100 and takes three to four hours for the class.

That’s a lot of money when inflation is eating up every penny with ever-rising fuel, food, and housing costs. Plus, the need for a person to take time off and take the mandated course eats up income too as individuals have to take time off from work and that means a loss of income.

If Florida’s lawmakers claim to be defenders of Floridians’ civil rights and the Governor claims that Florida is the freest state in the Union, then constitutional carry must pass and be signed into law. Anything less is just more of the same meaningless talk Floridians are tired of.