Sen. Kamala D. Harris (Calif.) held a town hall meeting at Canyon Springs High School in Nevada, the site of a fatal shooting last year. Former congressman Beto O’Rourke (Tex.) carries in his wallet a photo of a victim of gun violence and often recounts his 8-year-old’s story of hiding in a closet during an active-shooter drill. Sen. Elizabeth Warren (Mass.) has faced questions about gun control at nearly a dozen events. 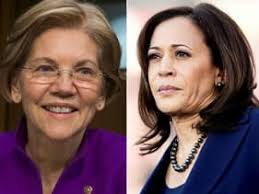 The 2020 Democratic presidential candidates are embracing gun control more enthusiastically than in any other campaign in recent memory, with emotional appeals against firearms violence….

“If their strategy involves trying to bring back Trump voters — voters from moderate to conservative areas — you probably don’t want the gun issue to get in the way,” said Robert J. Spitzer, who has written several books about gun politics. “You want to talk about health care or the economy or, from Democratic perspectives, uniting issues.”…

Michael Hammond, legislative counsel for the Gun Owners of America, said gun-control activists have believed the tide was shifting their way before, only to be disappointed later.

“We’re in the same situation now as following Newtown, following Columbine — a lot of Sturm und Drang but no shift in the fundamental political dynamics,” he said. “Guns are, in many parts of the country, an animating issue that will fundamentally make a difference if they believe — and I don’t think they believed in 2018 — that their gun ownership rights are actually in danger.”

In a focus group of building trade union members, held in Washington on Wednesday, several local leaders said that the Democrats need to assure voters that their hunting and hobbies will be safe.

“I want to hear them say, ‘I’m not going to take your guns,’ ” said Patrick J. Corrigan of the Cleveland-based Heat and Frost Insulators and Allied Workers Local 3. “That’s a big issue for my members.”