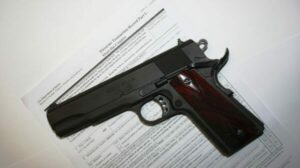 In April of 2021 AmmoLand News obtained a leak from the ATF showing that the Bureau was monitoring people’s firearm transactions that MIGHT commit a crime in the future. Using the National Instant Criminal Background Check System (NICS) the ATF kept tabs on over 1,000 American citizens. These law-abiding Americans have not committed any crime and are not under investigation. These are people the ATF or FBI believe are at risk of committing a crime in the future.

Gun rights activists have long worried the government would target law-abiding gun owners using NICS. It worried Gun Owners of America to the point they filed a Freedom of Information Act (FOIA) request. The goal of the FOIA was to determine how many Americans the ATF and FBI are tracking.

“It’s outrageous that our government is spying on law-abiding gun owners, who have committed no crimes,” GOA Senior Vice President Erich Pratt told AmmoLand News. “Congress needs to rein in the ATF and put a stop to this immediately.” “This is like the movie Minority Report, where the government targets those who might commit a crime. There are multiple problems with what the ATF is doing here, but let me use an analogy that even anti-gun Leftists should comprehend. What would they have said if the Trump administration had spied on illegal aliens who might vote in an election? Nancy Pelosi and Chuck Schumer would have been calling for impeachment hearings.”

The FOIA found that in May of 2020, the ATF was monitoring the firearms purchases of 525 people using NICS. That number has exploded to 826 individuals as of April 2021. The current trend is to monitor more instead of less law-abiding Americans. If this trend continues the ATF will be monitoring every American who ever legally purchased a firearm using a NICS background check.