The Liar-in-Chief Goes After Guns Once Again Yesterday was a tragic day in our history.

The shootings in Louisiana to Minnesota to Dallas have gripped the heart of our nation.

Sadly, but predictably, the anti-gun Left is using these events to push even more infringements on the Second Amendment.

Click on the Take Action button to email your Representative and Senators — urging them not to use recent shootings as an excuse for more gun control!

The President is renewing his push for a ban on semi-automatic firearms, given media reports that AR-15 styled firearms were used to ambush police officers in Dallas.

Speaking at the start of a NATO summit in Poland, the President targeted these weapons in his prepared remarks: 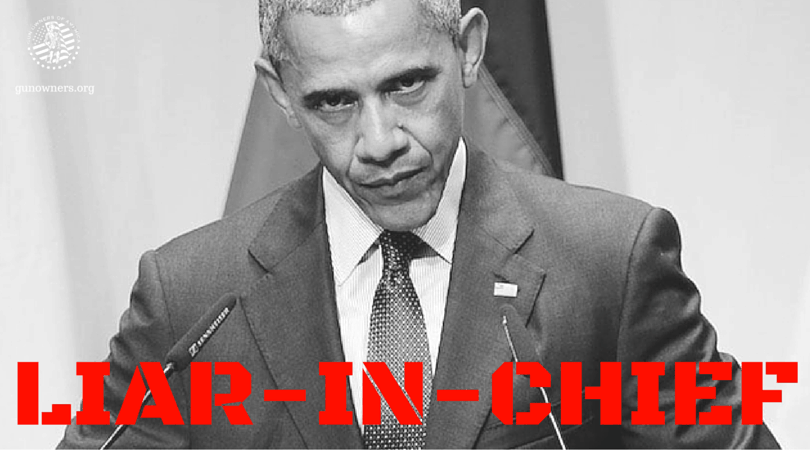 We also know that when people are armed with powerful weapons, unfortunately it makes attacks like these more deadly and more tragic, and in the days ahead we’re going to have to consider those realities as well [that is, enact more gun control].

The President’s words are a stark reminder that this is same man who was tagged with the “Lie of the Year” in 2013.

It helps to remember his struggle with truth-telling, because what he said today was a bald-faced lie.

Banning semi-automatic firearms and magazines will NOT make Americans safer, and the overwhelming majority of law enforcement would agree:

• 91% of officers say that banning so-called “assault weapons” would either have no effect or a negative effect in our efforts to reduce crime; and,

• 95% say that banning magazines holding more than 10 rounds would NOT reduce crime.

The President is using “officer safety” as an excuse to ban firearms, but our first responders have already rejected his premise.

Our law enforcement gets it. The Liar-in-Chief does not.

And they are promising more filibusters and disruptions in order to cower Republican leaders into holding more votes on gun control.

Thankfully, your activism has gone a long way in bucking up Congressional Republicans.

Politico reported that while House GOP leaders had promised a vote on gun control, they have “indefinitely delayed a roll call amid GOP infighting.”

Tell your Representatives and Senators not to use recent shootings as an excuse for more gun control.

Translated:  The GOP “infighting” has led to “indefinite delays” because a determined cadre of pro-gun Republicans are refusing to support any “gun control lite” legislation.

They are standing strong for now.

But you need to realize this:  Gun Owners of America has been speaking with some of these pro-gun legislators on Capitol Hill, and they are coming under intense pressure from their leadership.

They are being pressured to cave in and swallow gun control.

Thankfully, they have not done so.

But this is why it is SO IMPORTANT that you continue calling and emailing them.

GOA has asked you to engage in quite a bit of activism in recent weeks.  That’s because our rights have been under attack.

So once again, as we go into this weekend, we would urge you to take just a couple of seconds to send another email to your legislators.

Remind your Representative and Senators that our right to keep and bear arms is enshrined in the Constitution, and that they should uphold their oath of office.