YOU DID IT! WE DID IT! COLORADO DID IT!

“We may then all unite in rendering unto Him our sincere and humble thanks….” — President George Washington, October 3, 1789

What a startling upset.  The voters of Colorado have done it!

This was truly a historic effort and the first time in Colorado history that there has ever been a recall election — let alone a successful one. 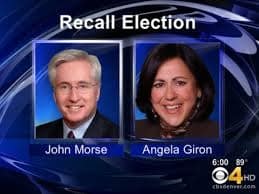 Democrat Senators John Morse and Angela Giron lost their bid to hold onto their seats in districts that heavily favored Democrats.  (In fact, Giron represented a district where only 23 percent of registered voters are Republicans.)

In Morse’s race, 51% of voters pulled the recall lever to eject him from office, while 56% of voters sided against Giron.

The effort to recall Morse and Giron began as a genuine local effort, although the prospects of beating two entrenched Democrats attracted big bucks from out of state.  Anti-gun New York City Mayor Michael Bloomberg spent hundreds of thousands of his own dollars in an attempt to help Morse retain his seat.

But it didn’t work.  And now the handwriting is on the wall for other legislators.

Morse especially angered constituents earlier this year when he, as the Senate President, helped slam several unconstitutional gun control bills through the legislature and onto Democrat Gov. John Hickenlooper’s desk — legislation such as magazine restrictions, bans on private gun sales (without a background check), etc.

Gun Owners of America stepped into the fray during the spring and summer, and did its part in rallying the troops to get Colorado voters to the polls.

And so, to the voters of Colorado, we at Gun Owners of America want to thank you all for your efforts to send a powerful message to the rest of the state — and the rest of the country.

As stated by the New York Times this morning, the recall has given “moderate lawmakers across the country a warning about the political risks of voting for tougher gun laws.”

Your activism in Colorado has truly been a model for the rest of us to follow!

Takeaways from the Zimmerman-Martin Tragedy