— Even after a CCW holder averts a mass shooting in Pennsylvania!

“More people are carrying concealed in this country, and yet the gun homicide rate has been dropping precipitously. We are safer today with more guns ‘on the street’ being carried in good people’s hands.” — GOA Communications Director Erich Pratt on WPFL, Florida (July 28, 2014).

There has been incredible news in the 2nd Amendment community over the past several days.

You may have heard that a DC federal judge struck down Washington, DC’s ban on carrying firearms in public on Saturday. Judge Frederick Scullen’s decision referenced the Supreme Court’s decisions in Heller (2008) and McDonald (2010) — arguing that the carry ban violates the U.S. Constitution.

And last week, a concealed carry holder in Darby, Pennsylvania, saved countless lives when he used his firearm to stop a killer who was bent on taking down even more innocent lives. 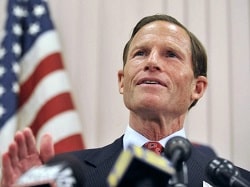 Police said the armed doctor “saved lives” and prevented a disgruntled patient from walking down the hall and gunning down people “until he ran out of ammunition.”

One would like to think that such good news would serve as an object lesson for our elected leaders.  But not for Harry Reid and his cohorts.

Even though the nation just witnessed a perfect example of how guns save lives in Pennsylvania, Senate Democrats are gearing up for another push to restrict 2nd Amendment rights.

So, what would you think Senate Democrats on the Judiciary Committee are working on in order to aid their campaigns?

And the gun control which is being pushed on these Senators’ behalf is a particularly nasty piece of work.

On Wednesday, the Senate Judiciary Committee will hold hearings on S. 1290 and S. 2483. Both are wholly politicized tools intended to allow embattled Senators to argue that Republicans are waging a “war on women.”

S. 2483, introduced by anti-gun zealot Richard Blumenthal (D-CT), would allow a judge to take away your guns in an “ex parte” proceeding in which you got no right to notice and no opportunity to attend or be heard. [Take into consideration that a domestic partner can already take out a restraining order.]

But, although Blumenthal is a lawyer, the constitutional concept of “due process” is unimportant to him.

If you could afford the thousands of dollars to afford a lawyer, you could petition a court within a reasonable time to get your illegally seized guns back — maybe possibly. But let us tell you a little secret: Judges are loathe to return guns under those circumstances — ever.

So you lose your guns and the Constitution goes “boom.”

Both the Blumenthal bill and Klobuchar’s S. 1290 would expand current law to allow your date to go after your Second Amendment rights. Sen. Amy Klobuchar (D-MN) would also impose a lifetime gun ban if you were convicted of the “misdemeanor crime of stalking” — and then allows the states to define “stalking” ANYWAY THEY WANT.

Typical double-speak.  As in Alice in Wonderland’s “first the execution, then the trial,” with Senate Democrats, it’s “first the ban; then the reason.”

Endangered Senators like Begich, Pryor, Udall, Landrieu, Franken and Warner are going to try to convince their constituents that they’re moderate, not crazy gun-grabbing loons. But these hearings say different. Democrats in the Senate will do whatever’s necessary to push Obama’s anti-gun agenda — and by voting to keep Senator Reid as the Majority Leader, these endangered Senators have perpetuated the assault on the Second Amendment.

ACTION: Contact your Senators. Tell them that these sham hearings show how much Senate Democrats hate the Second Amendment.  Urge them to pass concealed carry reciprocity as the means for making people safer.

Students for Concealed Carry will hold their third National Conference in Washington, DC on Tuesday, August 5 in Washington.  John Lott will be among the speakers.