Anti-gun Virginia Governor Swings for the Fences, Winds Up Striking Out Big Time

The showdown in the Old Dominion ended as soon as it began. 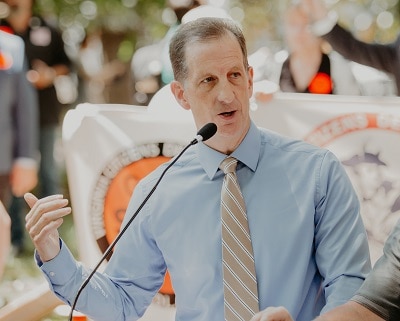 Senior Vice President of GOA, Erich Pratt, speaks in front of hundreds of gun owners and Second Amendment supporters near the General Assembly in Richmond, VA. Pratt called out Gov. Ralph “Blackface” Northam for pushing for gun control to distract from his racist scandals.

Gov. Ralph Northam (D) set out to use the recent Virginia Beach mass shooting to his political advantage.

He called the legislature back into session with one objective — to pass a litany of gun control proposals.

But he wound up empty. The legislature met briefly yesterday and then quickly adjourned without passing one iota of gun control.

The victory is one that gun owners should appreciate, no matter where you live.

It demonstrates the power of the grassroots and the importance of holding legislators accountable.

Media reports indicate that legislators received a “deluge of calls” in opposition to the Virginia Governor’s gun control proposals. 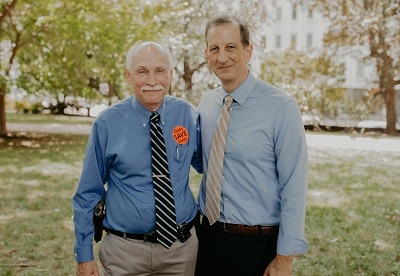 GOA mobilized thousands of Virginia gun owners  to contact their Delegates and Senators. And that includes almost 10,000 emails that were generated by GOA’s grassroots into two specific offices — that of House Speaker Kirk Cox (R) and Senate Majority Leader Tommy Norment (R).

Special kudos go to VCDL (the Virginia Citizens Defense League) for their leadership in the state in the weeks leading up to yesterday’s special session.

They hammered Senator Norment for introducing two gun control proposals that he was offering as a “middle ground” proposal.

Of course, leave it to Republican RINOs to always be willing to counter anti-gun Democrats with a Constructive Republican Alternative Proposal (C.R.A.P.). It’s disgusting.

Thankfully, not all Republicans were on board with Norment’s compromise. Senate Majority Whip Bill Stanley (R) resigned his leadership position in protest and called Norment’s actions “a great betrayal.”

Join the only no-compromise gun lobby for only $20!

One of Sen. Norment’s bills would have punished gun owners with a felony for merely stepping into a Gun Free Zone. In response to this, VCDL urged calls into Sen. Norment’s office.

The grassroots campaign was very effective. Not only did Norment hear from angry GOP Senators, he was also getting “pounded” by a lot of angry people in the hustings — thanks to alerts from groups like VCDL, GOA and others.

The “heat” that Sen. Norment was feeling must have been unbearable, because he ended up pulling his bills yesterday — effectively killing them. 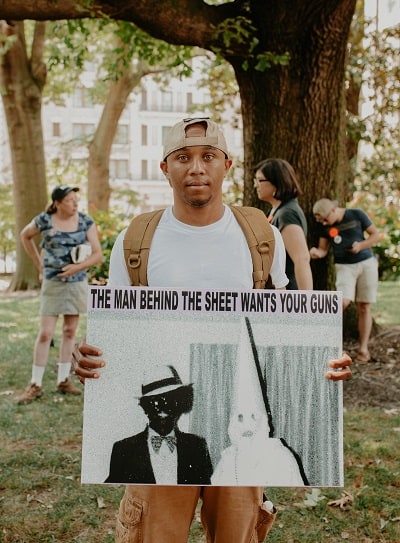 Devin Perkins, GOA member and host of the Trench Work Chronicles, holds a sign exposing the hypocrisy of the anti-gun and racist Governor Ralph Northam. Perkins and members of GOA’s staff engaged many anti-gun activists at the rally, debating and demonstrating the failures of gun control.

Shockingly, he tried to argue with a straight face that, “I do not support — nor will I support — any measure that restricts the constitutional rights of law-abiding citizens.”

Translated: “Wow, I really got a lot of calls and emails from constituents in my district and gun owners around the state, and I realize now that I really goofed.”

Again, gun owners around the country should be encouraged by these results.

Because it’s a reminder once again that our elected officials work for us … that when we organize and protest, it gets their attention … and that by working together, we can make a huge difference in defending our gun rights.

But it’s also a reminder that elections have consequences. The vote to adjourn without any votes on gun control was a party line vote.

The Republicans hold a narrow majority in both chambers in Virginia, and the state has off-year elections this November.

As in most states, Democrats are the party of gun control. So what happens if gun owners sit out the election — in Virginia and across the country next year?

You can only imagine: It will make the job of stopping gun control in your state capital all the harder.

This is what occurred in states like Colorado this year, where anti-gun Democrats control the House, Senate and Governor’s mansion.

They used that majority to their advantage by ramming a “red flag” Gun Confiscation Order into law.

As always, I want to thank you for helping keep GOA on the frontlines. 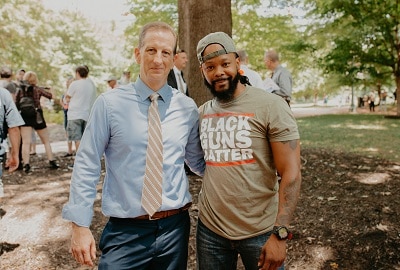 GOA’s Erich Pratt with Maj Toure, the founder of Black Guns Matter. Toure educates urban communities on firearm safety and gun rights, and he is also a GOA-backed candidate for Philadelphia city council. Toure gave a passionate speech on resisting tyranny, prompting loud cheers from gun owners at the rally.

Not only did GOA mobilize the grassroots with several email alerts, we also brought attention to what Gov. “Blackface” Northam was doing in national columns here and here, or in national radio spots, like this one on Fox News.

I was also grateful to speak at the rally outside the Virginia capitol yesterday — at the invitation of Philip van Cleave, who is the VCDL President.

Similar to one of the other speakers — that is, Maj Toure of Black Guns Matter — I pointed out the racist roots of the gun control policies being supported by the Governor.

This is the very same Governor who made national headlines earlier this year for his racist yearbook picture from years ago.

The Governor has equivocated greatly in his response to this scandal, leaving everyone to wonder whether he was the student in blackface or the student wearing a KKK hood.

So this is where things stand now in Virginia: Republican leaders assigned the state’s bipartisan crime commission to study the Governor’s gun control proposals, as well as, the Virginia Beach shooting. And the legislature is now poised to take up crime and gun-related issues after the November elections.

We will have to wait and see whether this is a good thing. Scheduling votes after an election is usually a problem.

But maybe this delaying tactic is just a technique to push off the Governor’s agenda indefinitely.

We will have to wait and see.

For now, I hope that no matter where you live, you’re encouraged by the tremendous victory your fellow gun owners achieved in the Old Dominion.

P.S. Thank you for helping keep Gun Owners of America on the frontlines. To renew your GOA membership or to join for the first time, please click here.