House Republicans Push Back Against Obama

The Obama Administration resumed its assault on gun owners this week, when it unveiled a so-called “Unified Agenda” containing 12 proposed anti-gun regs being planned by the Justice Department.

This prompted a Fox News discussion this week, where GOA Executive Director Larry Pratt debated an anti-gun (Bloomberg) spokesman. You can view that debate here.

Gun Owners of America will continue to update you about what is happening with this new ground assault being leveled by the Obama administration.

But first, we wanted to alert you to the counter-offensive that House Republicans are waging against Obama’s gun control agenda.

Kudos to Reps. Buck, Gosar, Massie and others

Several Republican Representatives in the House went to bat for gun owners this week and have successfully added good amendments to a “must pass” appropriations bill.

A “must pass” bill refers to a legislative funding bill that Obama is 99.9% certain to sign, given that he won’t shut down huge parts of the government for relatively minor add-on amendments.

But saying they’re relatively minor (to Obama) doesn’t mean they are insignificant to gun owners. Consider these pro-gun amendments that have been added to the Commerce-Justice-State appropriations bill (H.R. 2578): 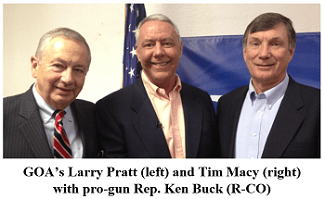 (1) Restoration of Rights. The House of Representatives adopted a GOA-backed amendment on Tuesday, offered by Congressman Ken Buck (R-CO), which would allow persons stripped of their constitutional Second Amendment rights to petition for a restoration of their rights.

Since the early 1990’s, an amendment by now-Senator Charles Schumer has cut off all money for that purpose. That means that veterans who can’t get relief from the VA’s clunky “relief from disability” system … or federal defendants who committed a minor white collar crime … can never again go hunting with their kids or defend their families against home invaders. The Buck amendment will allow this “restoration of rights” program to commence, once again.

(2) Blocking Obama ammo bans. The adoption of three GOA-backed ammo amendments will protect the rights of gun owners and send a very important message to the lawless anti-gun Justice Department. The first amendment — which was offered by Rep. Richard Hudson (R-NC) and accepted by voice vote — would prohibit the DOJ from banning M855 ammunition or imposing a comparable ammunition ban. The last two amendments, introduced by Reps. Thomas Massie (R-KY) and Paul Gosar (R-AZ), would overturn the Obama Administration’s 2014 ban on 7N6 ammunition. The Gosar amendment passed by a voice vote; the Massie amendment passed by a vote of 250-171.

(3) Pulling the plug on Operation Choke Point. The House adopted an important GOA-backed amendment that was put forward by Rep. Blaine Luetkemeyer (R-MO). His amendment “defunds” the Choke Point program which the Obama Administration has used to try and squeeze gun companies out of business.

(4) Nixing ATF racism. Rep. Diane Black’s GOA-supported amendment to prohibit gun forms from asking about the race of the purchaser was adopted by voice vote. Why does the government need the race of a gun purchaser in the first place? The “race” question was widely viewed as a “camel’s nose under tent” — presaging efforts to sneak more non-statutory questions onto the 4473 form.

(5) Punishing the Department of Justice. Rep. Gosar successfully added several amendments to cut the budget of the DOJ and the Bureau of Alcohol, Tobacco, Firearms and Explosives. In total, Gosar amendments cut the ATF by $10 million and the Justice Department by more than $2 million. The latter cut in funding was punishment for the administration’s failure to enforce immigration laws — which as GOA has pointed out in previous alerts, reflects the President’s apparent desire to import millions of additional anti-gun (Democrat) voters.

(6) Banning UN gun control, Fast & Furious, and more. In addition to the above amendments that were passed this week, the original CJS bill (H.R. 2578) already includes several riders pushed by GOA, including the following amendments:

* A permanent prohibition on Fast & Furious-like programs, where the Obama administration purposely approved the sale of firearms to gun traffickers along the border in an effort to use the ensuing violence in Mexico to justify additional gun control in the U.S.;

* A prohibition on banning the importation of certain shotguns;

* A ban on using funds to implement the U.N. Arms Trade Treaty; and,

* A ban on ATF’s illegal scheme to register the multiple sales of rifles by persons living in the four border states.

Stay tuned for additional updates, including a report on Obama’s most recent gun control offensive.

Meanwhile, please help support the work of Gun Owners of America, which is on the front lines defending your rights!