“We have to pass the bill so that you can find out what’s in it.” — Then-House Speaker Nancy Pelosi, encouraging rapid passage of ObamaCare in 2010

ACTION: Senate Majority Leader Mitch McConnell and Sen. Orrin Hatch may soon give the President authority to write gun control restrictions into a “trade agreement.” So click here to contact your Senators –- whether they are liberal or conservative. Urge them to vote against the anti-gun “fast track” bill (S. 995).

Will UN-style gun control be rammed down our throats?

This anti-gun wish list could be part of the secret trade agreement that President Obama is getting ready to spring on the Congress.

This trade pact is called “fast track,” and what it means is that Obama can write any form of gun control he chooses into a trade agreement — import bans, amnesty, etc.

And this agreement DOESN’T need two-thirds vote in the Senate, as a treaty would. When completed, the agreement is merely subject to a majority vote in both Houses … it can’t be filibustered … it can’t be amended … and the GOP can’t refuse to consider it.

Reports have already surfaced that the TOP SECRET draft contains a whole chapter with a European Union-style provision allowing unlimited migration from Mexico into the United States. This would fulfill Obama’s dream — which he begun with Executive Amnesty — to import millions of new anti-gun (liberal) voters into the country. 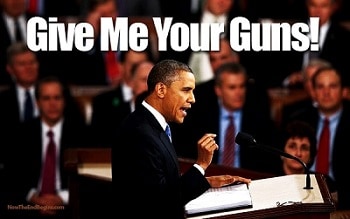 Of course, we can’t quote for you any of the language in the Trans-Pacific Partnership agreement because the document is TOP SECRET. Obama won’t reveal it, even to most congressmen, until Congress has given it its imprimatur by allowing it to pass under fast track procedures.

If you want to hear the details of the Trans-Pacific Partnership trade deal the Obama administration is hoping to pass, you’ve got to be a member of Congress, and you’ve got to go to classified briefings and leave your staff and cellphone at the door.

If you’re a [congressional] member who wants to read the text, you’ve got to go to a room in the basement of the Capitol Visitor Center and be handed it one section at a time, watched over as you read, and forced to hand over any notes you make before leaving.

And no matter what, you can’t discuss the details of what you’ve read.

Truly, even more than with ObamaCare, this is a case of “You have to pass it to find out what’s in it.”

Some Republicans are being duped

But that’s not all: The fast track authority being granted to Obama and his successor for the next six years applies to whatever type of trade negotiation Obama chooses to enter into.

So, if he can write the UN Arms Trade Treaty into a trade agreement, then it can’t be filibustered or amended or prevented from consideration.

Tragically, many conservative Republicans have listened to business lobbyists — who are focused on the free trade issues without considering the impact on personal liberties — and have endorsed fast track. But one business leader recently took Republican lawmakers to the woodshed for this:

By now Congressional Republicans should know better. The Obama administration has stonewalled Congress on many issues, e.g., guns to Mexico and the IRS scandal, and this President has ignored the law and by-passed Congress on such matters as executive amnesty and the Bergdahl prisoner exchange. [The] alleged economic benefits of TPP — and they are minimal … — do not trump the Constitution, the law, and the proper use of fast track.

It is significant that, in Sen. Orrin Hatch’s 114-page bill specifying the goals of U.S. trade negotiations (S. 995), there is not a single word prohibiting Obama from using the agreements to implement gun control. And yet, that gun control will be just as binding as if Congress enacted it in a statute.

You can read an article written by GOA’s Legislative Counsel, which goes into this issue in much more detail.

You can also go here to read the full article written by the business leader (mentioned above) explaining why fast track is NOT really about free trade.

ACTION: Contact your Senators — no matter whether they are conservative or liberal. Urge them to vote against the anti-gun fast track bill (S. 995).

NOTE: Separate letters are used for Republicans and Democrats. But by using GOA’s pre-written letter in the Engage system, the correct letter will be automatically sent.