House Votes to Defund ObamaCare on the Government Funding Resolution

The last, best chance to stop ObamaCare moves to the Senate.

House Votes to Defund ObamaCare on the Government Funding Resolution

“This is probably our last best chance to rid the country of this terrible [anti-gun] health care plan.” — GOA Executive Director Larry Pratt and Vice Chairman Tim Macy to grassroots activists across the country (Aug, 2013)

URGENT: Calls are needed to your Senators immediately (202-224-3121), as a key vote on ObamaCare is expected this week.  Please see the ACTION item below.

UPDATE: By a vote of 230-189 on Friday, the House voted to fund the federal government, while denying funding for ObamaCare.  See the vote here and thank or “spank” your Representative accordingly.  (“Aye” was the pro-gun vote.) 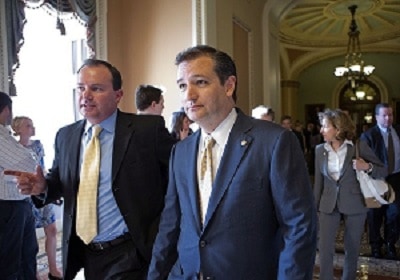 Kudos to you for your hard work and astounding victory!

But also, kudos to House conservatives, who stood up to Obama and his media minions, and to John Boehner, who to paraphrase Winston Churchill, did the right thing after all other options were exhausted.

Finally, we should give kudos to Senators Mike Lee (R-UT) and Ted Cruz (R-TX) who spearheaded the whole ObamaCare defunding fight on Capitol Hill.  Their push has resulted in this initial victory in the House.

Now, the action moves to the Senate, where Majority Leader Harry Reid will try to reinsert funding for the anti-gun ObamaCare law.

Republican Senators can defeat Reid’s substitute language by filibustering it, and we believe that this is where the battle lines will be drawn. If 41 senators vote in favor of prolonging the filibuster, ObamaCare is dead.

And, frankly, any senator who claims to oppose ObamaCare — but then votes against the filibuster (thus allowing Reid to reinsert funding for the anti-gun health care law) — is a lying hypocrite.

So the message for now is this:  Oppose any attempt to insert funding for the anti-gun ObamaCare law — even if it means voting to filibuster the House-passed CR.

So please distribute this alert far and wide and let’s mobilize that 73%!

Remember: ObamaCare will give the federal government the ability to use (and abuse) our medical data as the pretext for keeping law-abiding gun owners from possessing firearms — just as they have already done to more than 150,000 military veterans.  We need to keep the heat on the Senate!

ACTION: Contact your Senators. Demand that they oppose any attempt to insert funding for the anti-gun ObamaCare law — even if it means voting to filibuster the House-passed CR.  And don’t forget to forward this alert to your friends and family!

While sending an email is okay, IT IS PREFERRED THAT YOU MAKE PHONE CALLS TO YOUR SENATORS as the Senate filibuster vote could be occurring over the next couple of days.  So please call 202-224-3121.