Gun banners are using the recent Midland-Odessa, Texas, shooting to strip you — and all law-abiding gun owners — of your God-given, constitutionally-protected rights. 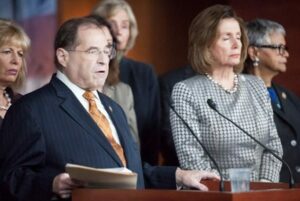 Well, you knew this day would come. The House Judiciary Committee will soon be meeting to pepper Republicans with three

But as we’ve mentioned to you in recent weeks: We know the House Democrats can pass virtually any gun control measure they want.

The real challenge is to make sure that House Republicans don’t join them. Because if they do, then that will cause Senate Republicans to defect in large numbers.

And if only 13 GOP Senators turn to the “dark side,” gun control will pass both chambers of Congress.

We’ve already seen, in recent weeks, Republicans like Dan Crenshaw of Texas say they might support a “red flag” law.

This is why we need to keep hammering House Republicans and urge them to hold firm.

The House Judiciary Committee was supposed to begin consideration of three gun control proposals today, but Hurricane Dorian has postponed the meeting until next week.

So here are the three gun control measures that we will be battling.

1) Magazine bans (H.R. 1186). This bill would ban all magazines with a capacity of over 10 rounds. If this bill were to pass into law, gun owners across the country would have to pray that they were never forced to defend themselves and their families against multiple attackers — as evidenced in Florida, Texas or Missouri.

2) “Red Flag” Gun Confiscation Orders (H.R. 1236/H.R. 3076). We’ve talked a lot about this legislation already. This bill would allow an angry relative or former boyfriend/girlfriend to petition a court to strip you of your gun rights, with nothing but a list of unsubstantiated allegations.

This is exactly what happened to Gary Willis of Ferndale, Maryland, and he was shot by police during the execution of the gun confiscation order.

Recently, at the Mall of New Hampshire, a man loitered in a women’s rest room for an hour — taking pictures of women in stalls.

If a woman threatened to remove him — and he claimed to be “a woman in the body of a man” as this person did here — that would be a “hate crime.”

All of these bills would be a nightmare for gun owners if they’re enacted into law. So please take action today.

Email Republican Representatives (above) and let them know that they will pay a horrendous price on Election Day if they support Nancy Pelosi’s gun confiscation agenda.

GOA to SCOTUS: Firearm Manufacturers are not Responsible for the Deeds of a Madman