Pro-gunners Squeak Out a 2-0 Victory in the Senate

ACTION: Contact your Senators and Representative.  Ask them to cosponsor the GOA-backed Rubio/Jordan bill (S. 874/H.R. 1701).

We had hoped that a newly invigorated Senate Republican majority would have been a little more enthusiastic.  But, in the end, we squeaked out a couple of victories on the Budget Resolution last week — and blocked the Bloomberg brigade from ever getting to first base.

First, thanks to Senator Mike Crapo (R-ID).  Senator Crapo was able to add a committee amendment to choke the anti-gun Operation Choke Point.  And the “Bloomberglers” didn’t even try to take it out on the floor. 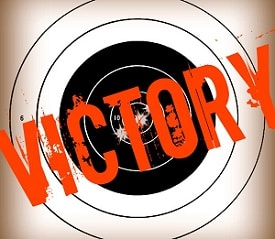 As you remember, Operation Choke Point is being used to try to convince banks to shut off credit to gun dealers and manufacturers. But we expect the Crapo amendment will probably put one final stake in the heart of that vampire.

Second, thanks to Senator Jim Inhofe (R-OK).  An Inhofe floor amendment to shut down the UN Arms Trade Treaty passed the Senate by a vote of 59-41.  The amendment is so far-reaching that it has been accused, probably correctly, of potentially shutting down parts of the United Nations if that organization continues to push the ATT.

As you know, that treaty could easily mandate gun bans, magazine bans, and gun registration.  Like Choke Point, the Inhofe amendment probably chokes the life out of the UN Arms Trade Treaty, once and for all.

We were hoping to get votes on at least three additional amendments.  But here’s what happened.

Of course, it’s already unlawful to own a gun if you’re a convicted domestic violence abuser or are subject to a domestic violence restraining order.  But the fact that their amendments were based on fraud and deception hardly mattered to the weasely anti-gunners.

In the end, everyone, pro-gun and anti-gun, pretty well backed away from their amendments — in an exercise which was the Senate equivalent of a stand-off.

The Rubio/Jordan bill (S. 874/H.R. 1701) would repeal Washington’s gun license requirement.  It would repeal the semi-auto ban and the microstamping requirement, and would turn D.C. into a “shall-issue” jurisdiction — an achievement which, while it wouldn’t be a big deal in pro-gun parts of the country, is a huge deal in this cesspool of anti-gun liberalism. 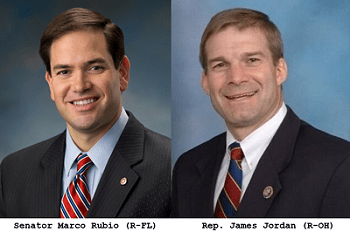 If embraced by Republican leadership of the House and Senate, the legislation could force a Second Amendment showdown with President Obama just two years after he failed in an attempt to win stricter gun control laws nationwide.

D.C. politico Kimberly Perry said:  “This is a small number of politicians willing to sacrifice their small-government principles to appease interest groups.”  (P.S.:  The “interest group” is apparently us.)

Perry had led a sit-in on behalf of D.C.’s marijuana legalization laws, and may, in fact, have been smoking something when she argued that it was a “small-government” value for D.C. to trample, Big Brother-style, over constitutional rights.

In fact, D.C.’s Big Brother-like government is so wedded to its gun ban that, six years ago, it killed a bill to give Washington a voting representative in the House, rather than accept an amendment which would have repealed the D.C. gun ban.

ACTION: Contact your Senators and Representative.  Ask them to cosponsor the GOA-backed Rubio/Jordan bill (S. 874/H.R. 1701).