Urge your Senators to put a stop to Republican-compromises

Coburn, will he stay the course?

{flike}
Urge your Senators to put a stop to Republican Compromises 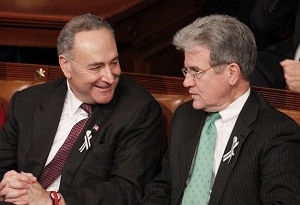 Anti-gun Sen. Charles Schumer’s staff is leaking out to the press the Oklahoma Sen. Tom Coburn is “on the verge” of caving in and agreeing to a ban on private gun sales — and requiring virtually every American to get the government’s approval before exercising their constitutional right to become a gun owner.

According to The Washington Post (2/23/13), the remaining sticking point is Coburn’s reluctance to require a 4473 for every private transaction.  Were this to occur, ATF’s practice of going into gun stores and copying all the 4473’s — a practice which has been documented by GOA — would soon produce a national gun registry.

Schumer’s people have also let it be known that they may have Susan Collins (R-ME), John McCain (R-AZ), and Jeff Flake (R-AZ) in the bag.  (Note to gun owners in these states:  These Senators really need to hear from you!)

Let’s assume, for the sake of argument, that the final version of the “Schumer sell-out” prohibits any paperwork from being kept on private gun sales.

Even then, the “Schumer Sell-Out” would still result in one out of sixteen legal gun purchases being permanently and illegally blocked.

According to scholar John Lott, 8% of all gun purchases are currently blocked by the FBI.  But, according to a recent study by the Department of Justice, only 1.8% of the 8% are blocked because they are “denied.”  That means that 6.2% are neither “denied” nor “approved.”  However, because most gun sellers won’t sell a firearm under these circumstances, even after three days, these legal gun purchasers are permanently denied their constitutional rights by bureaucratic fiat.

Although the FBI is legally required to state a reason for blocking a gun purchase within five days, it NEVER complies with the law — daring purchasers, instead, to “sue us.”  Most purchasers, lack the means to do just that.

The “Schumer Sell-Out” would still strip 150,000 veterans of their Second Amendment rights with no due process whatsoever. Sure, there will reportedly be throwaway language, supposedly allowing veterans to get the constitutional rights back.  Schumer fooled Coburn into accepting comparable language on a 2008 law, but it never had any impact.  The problem is not “getting their rights back.”  The problem is preventing their rights from being unconstitutionally stripped — with no due process whatsoever — in the first place.

Under the 2008 Schumer legislation, the Obama administration can use a psychiatrist’s diagnosis to strip veterans and others of their constitutional rights.  No court order is needed.  Soon, under Obama’s Executive Action Number 1, millions of Americans with ADHD, and even post partem depression could have their gun rights taken away with a keystroke by Medicare, Medicaid, and the Department of Education.  Firemen, policemen, and soldiers with PTSD could also lose their gun rights under the “Schumer sell-out,” and there’s nothing they could do about it.

The “Schumer Sell-Out” would exacerbate the problem with NICS system breakdowns during weekends and black Fridays — blocking all gun purchasers.

The “Schumer Sell-Out” would strip farmers and Americans in rural areas of their Second Amendment rights. Sure, there is a possibility that Schumer will accept do-nothing language in the Brady Law protecting remote Alaskan villages.  But millions of Americans would still have to travel hundreds of miles (accompanied by their sellers) in order to transfer a firearm to their next-door neighbor — hoping desperately that they’re not among the 6.2% of Americans who get a non-committal response from the FBI.

The “Schumer Sell-Out” would still be ineffectual to stop Adam Lanza (who stole his guns) and James Holmes and Jared Loughner (who passed background checks). In fact, an internal Department of Justice memorandum concedes that it would be almost totally ineffectual.

As a result, the main purpose of the “Schumer Sell-Out” remains, and has always been, to “break the back of the gun … lobby” and to serve as a platform for the next round of gun control.

The Sunday New York Times (2/23/13) pointed out what this is all about.  According to the Times, Schumer is jealous to protect the 13 Democratic seats in pro-gun states which will come up in 2014.  Press reports ascribe Coburn’s role as being one who will “provide cover” for Democrats running for reelection.

From a purely partisan standpoint, the GOP should realize that guns will serve as a powerful political weapon for them, unless Coburn’s acquiescence to the “Schumer Sell-Out” takes guns off the table.  In places like Arkansas and Montana, 95% of all voters would no doubt oppose the “Schumer sell-out,” as 95% of NRA members and 96% of 25,000 GOA members did in recent surveys.

Conversely, the “Schumer Sell-Out” will revitalize and engerize the handgun control movement.

Finally, the “Schumer Sell-Out” will give Obama the aura of invincibility and make it virtually impossible to stop the rest of his agenda.

If Sen. Coburn really wants to “compromise” with Schumer, he should make Schumer give up some ground and demand that Congress repeal the Gun-Free School Zones Act.  Now, that would be a real “compromise” that would save lives!

ACTION:  Contact your U.S. Senators and ask them to oppose the “Schumer sell-out.”  Click here to send a prewritten message to your Senators

Please note that there are two different action responses for you to send, and the system will automatically send that response, depending upon whether your Senator is a Republican or Democrat
Prev. Article
Next Article