Our Gun Rights are Hanging in the Balance

“I don’t think the American people want a Court that will write the Second Amendment out of the Constitution.” –Senator Ted Cruz to ABC’s George Stephanopoulos over the weekend.

ACTION: Urge your Senators to reject and oppose — in every possible way — any anti-gun “swing vote” nominated by President Obama.

By now, you have no doubt heard that Supreme Court Justice Antonin Scalia passed away on Saturday.

His pro-gun leadership on the Court will be sorely missed.

But we are now in the fight for our lives, as President Obama will try to nominate a replacement to change the balance of the Court. 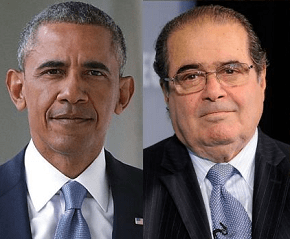 When ABC’s George Stephanopoulos quizzed Texas Sen. Ted Cruz over Scalia’s replacement, the Senator suggested that our Second Amendment rights are “hanging in the balance.”

No one should fail to understand what is at stake in Barack Obama’s scramble to appoint the “swing vote” on the Supreme Court.

If Obama appoints a replacement for Justice Antonin Scalia, the reconstituted court will declare the Second Amendment dead.

Those of us who are constitutionalists know that Obama and the Court can’t really obliterate the 2nd Amendment.  The Constitution trumps any unlawful action to the contrary.

Heller, the 5-4 decision which recognized the Second Amendment as an individual right, will be reversed.

McDonald, the 5-4 decision which recognized that the Second Amendment applies to the states, will be reversed.

Even sooner, the court will recognize Obama’s illegal efforts to grant amnesty to 5+ million anti-gun voters.

And the consequence will be that the entire U.S. government will soon be the same gun-hating “utopia” which California’s government became as a result of a 1986 amnesty bill.

The Leftist media has already begun their White House-coordinated campaign to bludgeon Senate Republicans into approving Obama’s efforts to pack the Supreme Court with a “jurist” who will repeal the Second Amendment — and achieve Obama’s life-long dream.

But all of their arguments are, transparently, lies and false propaganda.

FIRST: Everyone knows that the Obama appointment would result in the reversal of Heller — and the effective repeal of the Second Amendment — at least, as recognized by a corrupt court system.

He or she will say that they have no opinion on the Second Amendment.  And they will talk about legal doctrines like stare decisis — which supposedly gives a presumption to retaining “settled law.”

If there is one thing we have learned from Sonia Sotomayor, Elena Kagan, and the gaggle of Obama lower court appointees, it is this:  They will say whatever needs to be said to get on the Court, but they will run fast and hard to the Far Left once they are confirmed.

THIRD:  There is no constitutional principle which requires the Senate to approve a lawless nominee.

Besides, Obama has had no problem using the Constitution and the laws as toilet paper.

So he is the last one to lecture others on their “constitutional obligations” — particularly when the goal is to confirm lawless jurists who would rubber-stamp Obama’s unconstitutional and lawless actions.

Your contribution of $5, $10, $20 or more will help GOA rally opposition against Obama’s plan to stack the Supreme Court.

You might be surprised to know — but then again, maybe not — who it was that, as a Senator, loudly protested the ability of the President to simply get anyone he wants on the Supreme Court.

Remember who said this:

“There are some who believe that the President, having won the election, should have complete authority to appoint his nominee … that once you get beyond intellect and personal character, there should be no further question as to whether the judge should be confirmed. I disagree with this view.”

That was then-Senator Barack Obama in 2007, stating that the Senate can vote down a presidential nominee to the Supreme Court, based on his views alone.

Ironically, Obama was right then, and his words are true today — even more so than ever before!

You can be sure that GOA is going to remind every Senator of Barack Obama’s words before he became President.

And you can tremendously help by demanding that your Senators filibuster anyone who is nominated by President Obama — even if both of your Senators are Democrats.

We are going to remind every Democrat of what their “leader,” Barack Obama, said back in 2007.

We are going to make sure they feel the heat from the grassroots, so they know that their colleagues will pay a political price if they choose to listen to the leftist media.

Senator Ted Cruz promised ABC’s Stephanopoulos over the weekend that he would be willing to lead a filibuster against Obama’s nominee.

He’s led filibusters before.  He has the experience and knows what to do.

But we need to raise a national outcry like never before.

So please urge your Senators to reject and oppose — in every possible way — any anti-gun “swing vote” nominated by President Obama.

Tell them that any support for an Obama-nominee will be tantamount to a vote to reverse Heller and repeal the Second Amendment.

ACTION: Urge your Senators to reject and oppose — in every possible way — any anti-gun “swing vote” nominated by President Obama.