GOA is on the ground, advising House committee members

GOA is on the ground, advising House committee members

Attorney General Eric Holder is scheduled to appear before the House Oversight and Government Reform Committee tomorrow morning to answer for his failed leadership in regard to Operation Fast and Furious. 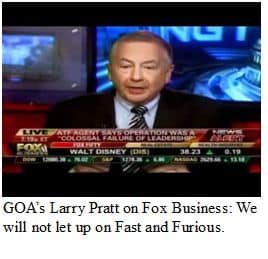 This operation, which was shepherded by Obama’s Justice Department, has led to thousands of guns being smuggled into Mexico — and to the deaths of two federal agents. Holder has already been caught in several lies and appears to be digging in his feet even further.

Committee Chairman Darrell Issa will be grilling Holder once again and has threatened the Attorney General with contempt charges if he continues stonewalling.

Issa warned that if the Attorney General continues to obstruct his investigation, “this committee will have no alternative but to move forward with proceedings to hold you in contempt of Congress.”

GOA staff has been working closely with House committee members, and we will be attending the hearings and reporting to you on developments — both public and behind-the-scenes.