Even the most liberal, anti-gun justice on the Supreme Court — Ruth Bader Ginsburg — didn’t sit in the witness chair in the Senate Judiciary Committee and tell us she intended to shred the Second Amendment. 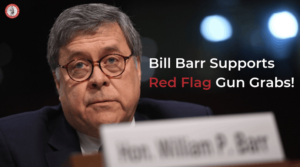 Yet that is what Barr did this week when he told senators he supported gun confiscation orders.

Of course, he led off with much milder rhetoric, telling Sen. John Cornyn (R-Texas) that “there’s room for reasonable regulation” on firearms laws — exactly the same lingo that Michael Bloomberg or Chuck Schumer would use. So much for the “shall not be infringed” protections in the Second Amendment!

But now it has become clear: Barr’s history as a gun control supporter goes back a long way.

Consider that in 1991 — in testimony before the Senate Judiciary Committee — he endorsed semi-auto bans, magazine bans, background checks and more. Said Barr:

On the assault weapon front, the proposal before us is the DeConcini amendment. And I think … I would support both the Brady Bill waiting period and the DeConcini amendment [semi-auto ban], provided that they were parts of a broader and more comprehensive crime bill that included … very tough provisions on the use of firearms in crimes and illegal purchase and trading in firearms.

Barr went on to endorse a comprehensive magazine ban as well.

Amazingly, when speaking before the Senate on Tuesday, Barr may have perjured himself by denying he ever supported a semi-auto ban.

When asked how his views from the early 1990s had changed after the Heller decision, Barr said: “I think I opposed an assault weapons ban [in the early 1990s].”

Of course, that’s clearly not what he said, and he’s obviously hoping that people don’t view the C-Span footage from 1991. [One can see Barr’s remarks at the 1:42:23 mark.]

During the Clinton administration, the semi-auto ban that Barr supported was signed into law — creating a backlash so extreme that Democrats who supported the “Barr package” were thrown out of Congress in large numbers for the first time in a generation.

Gun control was shown to be a political loser.

Given this fact — and given that President Trump had nominated Barr — we were hopeful this was evidence that Barr had come around over the past few years.

Sadly, this is not the case. As noted, Barr told Sen. Dianne Feinstein on Tuesday that his top gun priority will be gun confiscation orders:

I also think we need to push along the ERPOs [or Gun Confiscation Orders], so we have red flag laws to supplement the use of the background check…  This is the single most important thing I think we can do in the gun control area to stop these massacres from happening in the first place.

Wherever these laws have been passed, people have had their firearms confiscated without due process. And sometimes, it has resulted in death.

Consider the police shooting of 60-year-old Gary Willis of Ferndale, Maryland. Police shot Willis to death when they showed up to confiscate his guns at 5:17 a.m.

Let me repeat: gun control is a political loser for whichever party champions it. Americans threw Democrats out of office in 1994 — thereby giving control of Congress to Republicans — because of gun control like the semi-auto ban.

Even President Bill Clinton acknowledged this on several occasions. “The fight for the assault-weapons ban cost 20 members their seats in Congress,” Clinton said. He called it “the reason the Republicans control the House.”

So if Republicans wanted an issue to throw control of the Senate back to the Democrats in 2020, voting for William Barr — and supporting gun confiscation orders — seems like the perfect solution.

Even Sen. Dianne Feinstein, after hearing Barr’s plug for gun control on Tuesday, said: “Well, thank you, I’d like to work with you in that regard.”

For these reasons and more, Americans must call on U.S. senators to oppose William Barr’s nomination for attorney general.

Erich Pratt is the executive director of Gun Owners of America, a grassroots organization representing more than 1.5 million gun owners.