Why Sen. Tillis Could Help Obama Sink the Second Amendment

ACTION: Urge Senator Thom Tillis to reconsider his foolish statements and to refuse ANY consideration of an Obama “swing justice” who would effectively repeal the Second Amendment.

The stakes couldn’t be higher.

Barack Obama is preparing to nominate a replacement for Supreme Court Justice Antonin Scalia who would cast the deciding vote to reverse the Supreme Court’s gun decisions in Heller and McDonald. 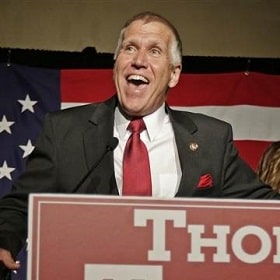 Once this happens, no individual would have a right, in the court’s fraudulent view, to “keep and bear arms.”  The Second Amendment would be effectively ripped out of the Constitution.

We know that the Constitution — and the Second Amendment — trumps any unlawful decision by the Supreme Court.

This is the battle we are now facing.

The liberal media has made it clear what their strategy is:  Put a “human face” to the anti-gun nominee … bring his or her photogenic family before a Senate hearing … and pick off Republican Senators one-by-one.

Fortunately, the Republican leadership has (so far) indicated they are not willing to give Barack Obama the chance to “fundamentally transform” this country by giving him a majority on the Supreme Court.

But then there’s the compromising Republican Senator Thom Tillis of North Carolina.

Senator Tillis, using language that he could have cribbed from the New York Times, has stabbed Mitch McConnell, fellow Republicans, and gun owners in the back.

He has, in effect, invited Obama to nominate and push an anti-gun nominee, and has refused to rule out confirmation of Barack Obama’s choice.

In so doing, he has knowingly — for his own political advantage — torn a hole in the GOP’s “wall of opposition” to Obama’s gun-grabbing choice.

Politico reports that Tillis’ remarks “are in contrast to Senate Majority Leader Mitch McConnell (R-KY), who last Saturday called on his colleagues not to move on any nominees until a new president is elected.”

McConnell’s approach is actually THE BEST way to fight Obama’s eventual anti-gun pick.  Because every time you give ground — by allowing a hearing or a floor vote — you allow Harry Reid and the Democrats to get one step closer to using parliamentary tools to put a radical anti-gunner on the Supreme Court.

It is imperative that gun owners in North Carolina put the heat on Thom Tillis and change his mind.

Otherwise, Obama and the liberal media can proceed to pick off more Tillis-like compromisers — one-by-one.

And we all know how this will play out.  Obama’s gun-confiscating choice will have no “paper trail.”  He or she will be articulate and will profess their love for the Second Amendment and for stare decisis.

Then, after confirmation, like Sonia Sotomayor, they will not be able to shred the Second Amendment fast enough.

Frankly, Gun Owners of America predicted in the senatorial primary that Tillis would be a compromiser.  And that’s exactly what he’s become.

So please urge Senator Thom Tillis to refuse ANY consideration of an Obama “swing justice” who would effectively repeal the Second Amendment.

After His Cruz LIE Was Exposed, Debunked, And Condemned By Coburn, Trump REPEATED It On Stage