Rep. Burt Removed from Committee that Hears all Gun Bills

The Speaker of the House, Stephen Shurtleff is retaliating against pro-gun State Rep. John Burt by removing him from his seat on the Criminal Justice and Public Safety Committee — where he has served for over 5 years.  This is significant because virtually every gun-related bill is heard by this committee.

Speaker Shurtleff didn’t even have the courage to tell Rep. Burt about his decision; instead, he sent a certified letter to his residence. 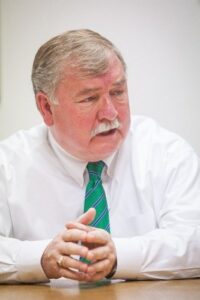 He used the lame excuse that Rep. Burt is being removed from the committee because of his negative comments about the anti-gun New Hampshire Fish and Game Department.

What this is really about is Rep. Burt’s strong pro-gun leadership.

He recently worked in committee to kill an “ought to pass” vote on HB 687 (gun confiscation) and the bill will go to the floor without a committee recommendation. He also got 71 other state representatives to co-sign a letter to President Trump, opposing all gun control.

Yes, it’s true that Rep. Burt has been critical of New Hampshire Fish and Game. But that was only after the Executive Director worked against the enactment of Constitutional Carry, opposed the decriminalization of the carrying of loaded rifles in cars, and fought against HB 1313 — a bill that Rep. Burt sponsored, which would have extended Constitutional Carry to snowmobiles and ATVs. The TV Show Northwoods law revealed many of the massive civil liberties violations regularly committed by New Hampshire’s Conservation Officers.

Rep. Burt is being removed from the Criminal Justice and Public Safety Committee for standing up for the Second, Fourth and Fifth Amendments to the Constitution.  Speaker Shurtleff needs to mollify the far-left elements of his party or he will face a mutiny.  He cannot hold onto the speaker’s gavel without the consent of the far left.

When Speaker Shurtleff got the Democrats to ban concealed carry in Representatives Hall, Rep Burt said: “As in 2013 and 2014 when (Democratic Speaker Terie) Norelli passed the same rule, I still will carry as I have and always will.”

Like the staff at Gun Owners of America, this is not theoretical for Rep. John Burt, it is real.  He lives the Second Amendment daily.  He owns, carries and uses firearms — just like we do.  His main purpose: self-defense.

And this is why anti-gun Speaker Shurtleff is singling out Rep. Burt.  He needs to do everything he can to dilute Rep. Burt’s strong voice in support of Second Amendment civil rights.

Rep. Burt has always been there for us and now, we need to stand strong and speak up for him.  Here is what I need you to do:

Please contact House Speaker Stephen Shurtleff (above) and let him know that you are onto his dictator-like move against Rep. Burt.  Urge Speaker Shurtleff to put Rep. Burt back on the Criminal Justice Committee and issue a public apology.

Please contact your own State Reps. (below) and urge them to contact Speaker Shurtleff and demand that Rep. Burt be immediately placed back onto the Criminal Justice and Public Safety Committee.  Ask your State Reps. to remind Speaker Shurtleff that he is allowing Rep. Tamara Le to remain on the Education Committee even after she used dirty words to describe schools with which she disagreed.

But Rep. Burt was removed from his Committee for doing nothing more than advocating for the Constitutional rights of his constituents.  It is vitally important that you urge your State Reps. to insist that Rep. Burt be seated on the Criminal Justice and Public Safety Committee without any delay.