Those words are written in five different languages at the abandoned Dachau prison camp, a testimony to everyone who visits there that such an atrocity will never again be tolerated.

It’s wonderful to hear this “never again” kind of determination.  But it defies logic that the Obama Administration refuses to adopt a similar attitude in solving this ever-daunting question:  Why do mass shootings keep occurring in gun-free zones? 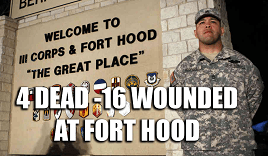 There were a myriad of soldiers who were within 100 ft. of where the Ft. Hood shooter, Ivan Lopez, committed his evil act this past April.

And this led the mother of one of those soldiers to comment on how everyone in her family, including her, carries concealed firearms for self-defense — except, that is, for her son at Ft. Hood.

“I’m in a better position to defend my family than [my son] is, and that’s a shame.”

Sadly, she’s absolutely right.  And that’s why on this Veterans Day — on behalf of all servicemen (both active duty and retired) — GOA can think of no better present than securing a repeal of DoD directives from the early 1990s, which continue to render many of our military bases as gun-free zones.

This year’s shooting was the second time that an assailant has murdered soldiers at Ft. Hood — and yet, such bases are forced to remain as gun-free zones, where only the MP’s are armed.

Does it make sense that our soldiers, who have been trained in the use of firearms, must dial 911 when they are under attack?

Not according to Rep. Steve Stockman of Texas, who introduced legislation to repeal the ban on carrying firearms on military bases.

“Why are civilians at a restaurant allowed to defend themselves but soldiers trained in firearms aren’t?” Stockman asked.  “Why can’t we extend common sense gun laws like open carry to our soldiers?”

Ret. Sgt. Alonzo Lunsford — who survived the 2009 Ft. Hood shooting, despite being shot 7 times by the first Ft. Hood shooter, Nidal Hasan — told the media that “I think more guns” is the answer.

“If everybody has a gun, [the shooter] might hit one,” Sgt. Lunsford said, but he “won’t be able to shoot the whole place up.”

Lt. Patrick Cook was another soldier at Ft. Hood, who was trapped inside an enclosed room during the Lopez shooting spree.  Lt. Cook reached to his belt “for something that wasn’t there,” and felt his stomach turn as he entered the “darkest twenty minutes” of his life.

“Stripped of my God-given Right to arm myself,” Lt. Cook said, “the only defensive posture I had left was to lie prostrate on the ground, and wait to die.”

Lt. Cook is outraged that he and others like him have been disarmed, and he warned that such shootings will continue if we don’t adopt a “never again” type of attitude.

“This will happen again, and again until we learn the lesson that suppressing the bearing of arms doesn’t prevent horrific crimes,” Lt. Cook warned. “It invites them.”

Lt. Cook is joined by more than 80% of law-enforcement, who support concealed carry for all law-abiding civilians and assert that arming citizens would reduce the number of casualties during mass shootings.

Armed civilians have successfully prevented massacres all across the country — from restaurants to churches to malls and more.

The nation witnessed such a case this past July in Darby, Pennsylvania, when a doctor saved countless lives after he incapacitated a patient who had armed himself, walked past the gun-free zone sign and gunned down a case worker.

Next on the killer’s hit list was the doctor himself.

But what the gunman, Richard Plotts, hadn’t counted on was that his intended target, Dr. Lee Silverman, had defied hospital policy and was carrying a gun of his own.

Dr. Silverman is a lawful permit holder who regularly carries a handgun.  Having come under fire, the doctor crouched behind a desk and shot back, hitting Potts three times in the mid-section.

Police have credited the doctor with stopping a mass shooting and say that if the doctor had not been armed, many innocent people would have died.

This is not the first time that a gun owner has stopped a mass shooting.  Why shouldn’t active duty soldiers be given a fighting chance, too?

Arming the soldiers a reasonable solution

Sadly, Stockman’s bill did not pass this year, but Gun Owners of America will work with the next Congress to get an identical bill introduced and passed.

“Saving lives by allowing trained soldiers to carry firearms should be an easy fix,” said Rep. Stockman.  “No reasonable person can oppose that.”

Yes, no “reasonable” person should.  Otherwise, we will continue to invite tragedy in our nation’s gun free zones — including our military bases.

Erich Pratt is the Director of Communications of Gun Owners of America, a grassroots gun lobby with a million members and activists.