Alleged Intruder Kicks in Door, Greeted with Shotgun Blast to the Chest 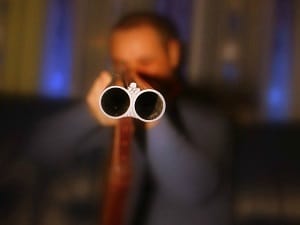 An alleged intruder who kicked in a door in Lakeland, Florida, is hospitalized in critical condition after being greeted with a shotgun blast to the chest.

WFLA reports that the homeowner, 66-year-old Michael Ives, warned Jacobs numerous times before shooting. Ives said he first made contact with Jacobs by yelling through the door that he was armed, warning him not to come in. After Jacobs allegedly kicked in the door, Ives warned Jacobs not to come closer but Jacobs allegedly ignored the warning and went right at Ives. At that point Ives shot Jacobs one time in the chest.

The State of the Union: The Second Amendment Version