The State of the Union: The Second Amendment Version

Thank You for Helping Protect the Second Amendment!

As President Trump gives the State of the Union address on Tuesday night, I’d like to bring you up to speed with the State of Our Gun Rights in January, 2018.

For starters, the State of our Union is … 1,000% better than it was almost 13 months ago under Barack Obama.

But not nearly good enough.

Under Barack Obama, we were fighting a new rule that would troll Social Security disability rolls for names to send to the NICS gun-ban list.

That anti-gun rule has been repealed, thanks to activists like yourself from very loud gun owners!

You can read about this victory and others by clicking on GOA’s Top Ten highlights from last year.

And you can watch a one-minute video on GOA’s influence — all seen through the eyes of anti-gun media and Congressmen … all complete with their howls of protest!

Oh what a difference 13 months makes!

Under Barack Obama, “guidelines” threatened to prosecute gun collectors as unlicensed dealers.  Donald Trump has backed off from that.

Under Barack Obama, State Department rules threatened to prosecute gunsmiths as unlicensed gun importers.  Donald Trump has backed off from that. 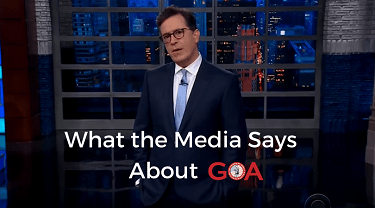 Under Barack Obama, we were constantly under fire from those who would impose a gun ban on you, merely by putting your name on a secret list.  Donald Trump has backed off from that.

Under Barack Obama, we repeatedly held our breath, as import bans were proposed for shotguns and AR-15 ammunition, merely because Obama disliked guns.  We are no longer in fear of those bans.

Under Barack Obama, scores of anti-gun judges were confirmed as part of his court-packing scheme. Under Donald Trump, constitutional judges are now being confirmed, with pro-gun Justice Neil Gorsuch having been added to the Supreme Court.

Under Barack Obama, we were fighting “sentencing reform” that would have increased, by 50%, the prison sentences for any of the 257,000 military veterans who kept their guns in defiance of the anti-gun Veterans Disarmament Act.  Under Donald Trump, the Justice Department is cracking down on criminals, rather than law-abiding gun owners.

Under Barack Obama, we were fighting the anti-gun ObamaCare program.  Donald Trump has repealed the individual mandate that required you to participate in that unconstitutional abomination.

Opportunities and Challenges in 2018

Under President Trump, we are seriously considering the removal of suppressors from the National Firearms Act. 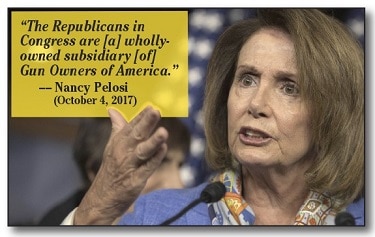 Under President Trump, we are anticipating an executive order which would undo every slimy aspect of Barack Obama’s gun-hating legacy.

But there are still challenges.

Even under Donald Trump, the ATF is considering, by executive fiat, banning any device that “accelerates the rate of fire” of a semi-automatic firearm.

If it does so, it will simultaneously ban standard-to-high capacity magazines, polished bolts, and perhaps even tripods, scopes, and pistol grips.  Even Barack Obama did not assume he had the executive power to do this.

Even under Donald Trump, we are fighting Cornyn-Schumer-Feinstein legislation which would give out two-thirds of a billion dollars in bribes to get states and federal agencies to ban guns for more veterans, more people with unpaid traffic tickets, more medical marijuana users, more people who were victims of “secret gun ban hearings” without any due process whatsoever.

At the state level, more and more states are joining the Constitutional Carry alliance — recognizing that your constitutional rights aren’t subject to a licensure requirement.

But, at the same time, anti-gun cities, which are becoming cesspools of crime, are dreaming up crazier and crazier schemes to disguise the fact that their repressive laws have not reduced crime.

So, again, the State of the Union is better.  But not good enough.

You are the reason we are such a feared gun lobby in Washington. Please help us keep it that way.

P.S. Thank you for standing with us last year. Your activism has made a huge difference.  And if you’ve let your GOA membership lapse, make sure to renew your membership in Gun Owners of America today for only $20!