A bill to allow concealed carry permit holders to carry in many of Kansas’ public buildings is scheduled for a hearing this week.

Currently, many publically-owned buildings are posted with “no firearms” signs. Legislation introduced by Rep. Forrest Knox (R-13) requires that the signs be removed from any of these buildings that do not have security posted at public entrances (metal detectors), and that concealed firearms be allowed in such buildings. 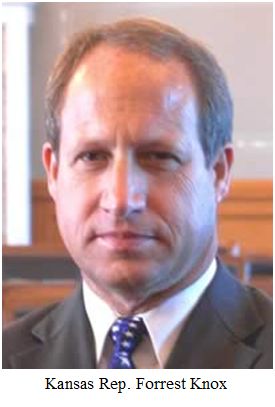 “You have an open invitation for somebody to come in and do harm because they know there’s not law enforcement there,” Rep. Knox said. “They know there is not security there and they know there is a sign that’s making everybody that has a conceal carry license leave their weapons in their cars.”

Gun Owners of America is urging the Kansas legislature to pass HB 2353. The House Federal and State Affairs Committee has scheduled hearings on HB 2353 at 1:30 on Wednesday and Thursday this week.

The hearings are open to the public. Supporters of the bill will be allowed to speak on Wednesday, opponents on Thursday.

For those interested in attending, the hearing will be held in Room 346 South at the capitol building in Topeka.

Of course, most people are not in a position to drop everything and head to the capital. So please take a minute and contact your own representative and urge him or her to support Rep. Knox’s bill, HB 2353.

Click here for a roster of House members with emails and phone numbers. If you don’t know who your state representative is, click here to search by address.

You can use the prewritten letter below to cut and paste in an email or for talking points:

Rep. Forrest Knox introduced a bill to expand the rights of concealed carry into public buildings that do not provide security.

This is a commonsense measure. So-called “gun free zones” are an invitation for violent criminals. Law-abiding CCW holders should be allowed to carry in these public buildings for the protections of themselves and loved ones.

Please support HB 2353 by voting in favor of it on the floor and by urging members of the Federal and State Affairs Committee to report the bill favorably.

Thank you for taking action on this important issue.  To support the ongoing work of Gun Owners of America, please click here.