Some Journalists, Lawmakers Afraid That Floridians Can Carry at the State Capitol

The Tampa Bay Times broke some news in a recent article titled ‘Florida’s Capitol allows some to carry guns, even amid security threat.’ 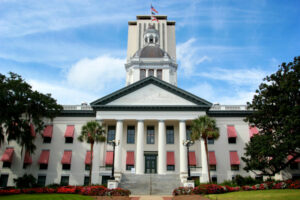 In this hit piece on Second Amendment rights, its author, Christopher Cann of the University of Florida College of Journalism and Communications, claimed that being able to legally carry a self-defense firearm at the state capitol is a “surprising oddity.”

It isn’t asinine that you have law-abiding people who take responsibility for their own defense and safety when they visit the capitol while legally armed. And if asked, these legally armed citizens are required to prove to law enforcement that they have a government-issued permission slip.

As recent events in Washington, DC showed, no law will stop determined criminals. When a criminal is determined to break the law, they will break the law. It doesn’t matter if a jumble of words on a sign says who can and can’t carry a firearm in a given location. Bad people will do bad things. That is the nature of criminality.

This was clearly proven in Parkland where a murderer violated the Federal Gun Free Zone Act and state law didn’t stop him from carrying a rifle into Marjory Stoneman Douglas High School. Yet Democratic lawmakers in Tallahassee seem to think otherwise.

“The fact that people can just walk into my office armed, and that be okay, concerns me,” he said.

If Rep. Smith is so afraid of being gunned down in his office, maybe he should take a class offered at one of the numerous locations across the state and learn that self-defense is his own responsibility. While the Capitol Police do a good job, they can’t be everywhere.

Some Republican lawmakers, those like Rep. Sabatini have different view.

Rep. Anthony Sabatini, R-Clermont, one of the Legislature’s staunchest gun rights advocates, said he and other state lawmakers carry their own concealed guns in the Capitol. He said he supports openly carrying guns in the Capitol and other government buildings. This year Sabatini has again proposed allowing people to carry guns on college campuses.

Rep. Sabatini clearly understands that if someone wishes to cause harm, he is responsible for his personal safety. The Florida Capitol Police do a good job, but like every other law enforcement agency – they cannot be held liable for a failure to prevent a criminal act.

Over two million Florida concealed weapons licenses have been issued and I can say from personal experience at the capitol, that these law-abiding citizens are a non-issue. As Sen. Jeff Brandes affirmed, the safest people in the state are those who jump through the government-imposed hoops to exercise their own inalienable rights.

Other states trust their citizens to carry firearms even in their capitols and government offices. There aren’t any rivers of blood flowing in those states. It seems the only places with violence problems are those that heavily restrict the honest citizenry from exercising their constitutional right to be armed.