Take Action below to EMAIL your State Representative and urge him to co-sponsor Mayor Peduto’s Impeachment Resolution!

On April 9, 2019, Pittsburgh Mayor William “Bill” Peduto signed three gun control ordinances into law in clear violation of the Constitution of the Commonwealth and the state firearms preemption law. 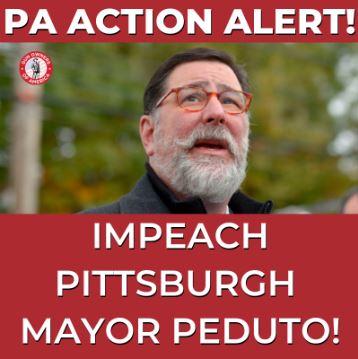 Mayor Peduto knew his actions were illegal and unconstitutional from the start, as he ignored stern warnings from Allegheny County District Attorney Stephen A. Zappala that the Mayor and City Council have no authority to enact gun control legislation.

In response to these lawless actions, State Representative Daryl Metcalfe (R-12) will introduce a resolution in the Pennsylvania House of Representatives calling for Mayor Peduto’s impeachment.

Representative Metcalfe announced his resolution at the conclusion of the 14th Annual Rally to Protect Your Right to Keep and Bear Arms at the Harrisburg Capitol. Thousands cheered as he made the announcement.

In a letter to his fellow legislators, Representative Metcalfe stated that:

Mayor William Peduto is guilty of the impeachable offense of violating the Constitution.  He willfully, brazenly, arrogantly violated the law because he doesn’t agree with employing the processes that are in place to change it. When we have somebody who’s in elected office who grossly abused the very law that he swore an oath to defend, we cannot let that stand without challenge.

Make no mistake about it, Mayor Peduto’s actions are a brazen defiance of the public trust. Why are ordinary citizens like you and I expected to obey the law while our elected officials can violate it with impunity?

But the weak and spineless House Republican leadership is already refusing to act.

House Majority Press Secretary, Mike Straub, said in a recent press report that the Republican caucus leaders are not interested in impeachng Mr. Peduto “or any other freely elected office holders.” 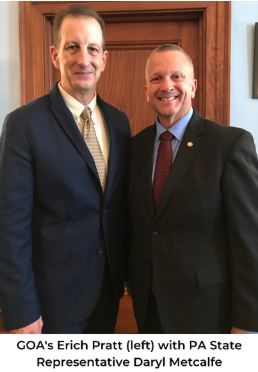 Incredible! If we follow Mike Straub’s logic, no elected official could ever be impeached for anything.

Don’t stand for this. Call Republican House Speaker, Mike Turzai, at 717-772-9943 and demand that the Republican leadership back Mayor Peduto’s impeachment.

In light of this Republican resistance, Representative Metcalfe requires your help.

He needs to get as many co-sponsors for Mayor Peduto’s impeachment resolution as he possibly can get.

NOTE: For your convenience, you can use the action box below to call the Speaker — and a call script will be provided for you.