Written by Erich Pratt and appearing in WND.com Published: 06 January 2016 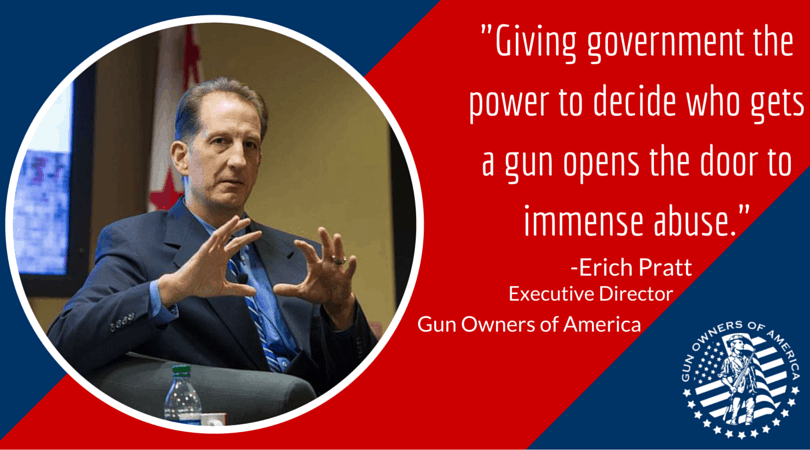 “The president’s latest action has nothing to do with ‘clarifying’ the law. Rather, it is an attempt to threaten and intimidate American gun owners into following what Mafioso-in-Chief Obama wishes the law to be – or else risk becoming victims of federal overreach by overzealous, anti-gun federal prosecutors. In doing so, the president has confirmed yet again that ‘gun control is not about guns, it’s about control.'” – Erich Pratt, Executive Director of GOA

On Tuesday, the Obama administration announced another set of “executive actions” designed to bypass Congress and impose new gun controls by imperial fiat. The main focus of these actions allegedly is to “clarify” what constitutes being “engaged in the business” of dealing in firearms, thus requiring a federal firearms license (“FFL”).

Gun owners should know, however, that this purported “clarification” does nothing to change the current law, which already is quite clear. Rather, the Obama administration’s purpose appears to be the launch of a campaign of fear against law-abiding gun owners. The president has long stated that his goal is to require a background check for 100 percent of gun sales. Absent any authority to do that on his own, his next best option was to threaten to prosecute gun owners who engage in private sales, hoping to intimidate them into running their legal sales through FFLs rather than to take the risk.

Today, a person is “engaged in the business” if he “devotes time, attention, and labor to dealing in firearms as a regular course of trade or business with the principal objective of livelihood and profit through the repetitive purchase and resale of firearms. …”

Although criminal statutes that define crimes rarely go so far as to clarify what is not a crime, in this case Congress wanted to protect gun owners to the maximum extent possible by providing a safe harbor. Thus, the statute states that the definition of dealing “shall not include a person who makes occasional sales, exchanges, or purchases of firearms for the enhancement of a personal collection or for a hobby, or who sells all or part of his personal collection of firearms. …”

Congress then went even further, requiring that a person buy and resell firearms “with the principal objective of livelihood and profit” – which “means that the intent underlying the sale or disposition of firearms is predominately one of obtaining livelihood and pecuniary gain, as opposed to other intents, such as improving or liquidating a personal firearms collection.”

Now that is quite a lengthy definition. But Congress wanted to be very careful to precisely define a firearms dealer, so that the executive branch (from the president to the attorney general to federal prosecutors) would not be able to put their own “spin” on the law. Indeed, even the rogue ATF was left with no wiggle room and admits that its regulation “is identical to the language of the statute.”

Before the administration announced these executive actions earlier this week, there were rumors of what direction the actions might take. There were rumors of requiring a person to hold a gun for a certain period of time before he could sell it. The statute, however, requires a person to have “the principal objective of livelihood and profit.” So if a person sells a gun without gain, even an hour after he bought it and decided he didn’t like it, he’s protected.

Also, there were rumors of putting limits on the number of guns that could be sold per year, but the statute says a person can sell his entire collection — no matter how many guns that is.

Finally, there were rumors of putting a cap on how many guns a person could offer for sale at one time, but of course the statute says a person can add to and subtract from his personal collection whenever he wants.

Since the statute is clear, there really was nothing the Obama administration could do to “interpret” it. Why, then, did Obama feel the need to “clarify” a statute that has been so clear for more than three decades? Why the sudden need to remind people to obey the law?

The real answer is far more sinister. While purporting to remind gun owners of their obligations under the law, the administration was really issuing a veiled threat. For example, the White House press release claims that “courts have upheld convictions for dealing without a license when as few as two firearms were sold, or when only one or two transactions took place.” They then throw in the fine print – “when other factors were also present.” But the real intent is clear – to send a message that even if a person is a law-abiding gun owner, and even if he only occasionally sells guns to add to and subtract from his personal collection – he had still better be looking over his shoulder.

As a result of the president’s actions, the ordinary gun owner no doubt will be left with the impression that it is safest to just altogether stop selling guns privately, and instead run any sales through a licensed dealer. Indeed, as of Tuesday afternoon, firearm message boards were awash with questions from ordinary, law-abiding gun owners, asking whether they are still even allowed to sell their guns. Better to be safe than sorry, many people are saying, especially with 200 new ATF agents running around looking for Americans to imprison!

The president’s latest action has nothing to do with “clarifying” the law. Rather, it is an attempt to threaten and intimidate American gun owners into following what Mafioso-in-Chief Obama wishes the law to be – or else risk becoming victims of federal overreach by overzealous, anti-gun federal prosecutors. In doing so, the president has confirmed yet again that “gun control is not about guns, it’s about control.”

Erich Pratt is executive director of Gun Owners of America.